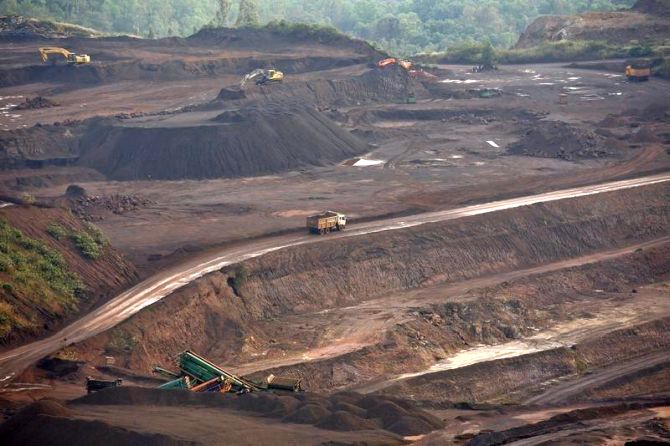 Karnataka government has decided to cancel the lease given to NMDC for the Donimalai iron ore mine and to put it under auction.

This is contrary to the earlier expectation of the mine's resumption after the high court passed an order in favour of NMDC in July.

The court had allowed public sector miner NMDC to resume operations at the Donimalai mine in July after eight months.

NMDC had closed the mine after the then Congress/JDS-led government in the state had imposed an 80 per cent premium on the average selling price of iron ore sold from the mine.

NMDC said that it has field revision application against Karnataka government's order with Ministry of Mines and the hearing is fixed on August 21, 2019.

The company has also requested the state government to withdraw its letter and keep it in abeyance.

Analysts said that the development would not only impact NMDC's ouput from Donimalai, but also create uncertainty over the resumption of mining in Chhattisgarh where most of the mining leases are due for renewal in March 2020.

In a letter, a copy of which is available with Business Standard, to the director of the Department of Mines and Geology, Karnataka MSME & Mines secretary said that the government has withdrawn the approval letter, issued in November 2018, to extend the mining lease period of NMDC in the Donimalai Range with immediate effect and that it would auction the said block.

The mine lease is spread over the 608 hectares of the Donimalai Range in Karnataka's Bellary district.

He added that the mining block would be put for e-auction.

The letter further stated that bid documents and the technical committee constituted for the purpose would be placed before the State Empowered Committee for obtaining a post facto approval of the government to conduct the auction of the mining block, earlier held by the NMDC.

NMDC and the state administration got into a legal battle over Donimalai after the state government decided to levy a premium on the iron ore extracted from the mine, while extending the lease.

However, the NMDC stopped mining operations and moved the high court, which ruled in favour of NMDC.

Iron ore deposits in the Donimali mine are estimated at 143 million tonnes (MMT) and worth around Rs 40,000 crore.

"This event may completely change the profit dynamics of NMDC as it may have to compete with private producers and pay a huge premium to get its mines back," said an analyst.

He added, however, that uncertainty remains till clarity emerges on the renewal of Chhattisgarh mines.

Even a loss of volume only from the Donimalai mine might hit NMDC's FY21 earnings and profits.

However, it is difficult at present to put any target price to this uncertainty, said the analyst.