Unable to sell cattle, farmers have a beef with Modi's BJP

Farmer suicides have nearly doubled in the drought-hit Marathwada region of Maharashtra. 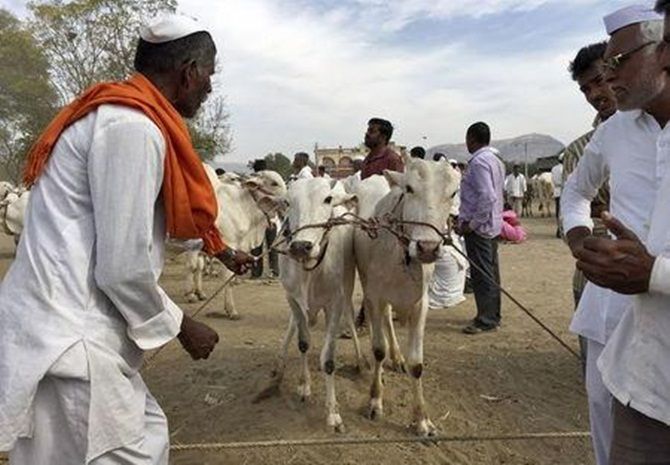 Image: The impact of the beef ban has been significant. Photograph: Reuters

A ban on the sale of cattle for slaughter in India's richest state is threatening to push millions of farmers into penury, deepening distress in the countryside and fanning resentment against Prime Minister Narendra Modi's ruling party.

Slaughter of cows, considered sacred in Hinduism, has historically been banned in most states but was rarely enforced in India, the world's largest exporter of beef.

But over the past year, states ruled by Modi's Bharatiya Janata Party (BJP), such as Maharashtra, have broadened the ban to include other types of cattle, like bulls and bullocks, and Hindu vigilantes have stepped up attacks on traders to enforce the prohibition.

The stricter rules come as Modi and the nationalist BJP lay greater stress on India's Hindu faith, to which the majority of the population belongs.

Minority groups, including around 180 million Muslims, have expressed concern over the implications.

The impact of the beef ban has been significant.

Prices of cattle have fallen across the country, India's meat exports fell 13 percent in the April-December period and rival beef supplier Brazil is gaining from India's loss.

It has also left millions of farmers, already reeling from bad harvests due to back-to-back droughts and unseasonal rains, struggling to sell animals they can no longer feed or water.

"I wonder what the government wants - our survival or the cattle's?" said farmer Revaji Choudhary, standing next to a pair of bulls he has been trying to sell for weeks in a cattle market in Maharashtra.

Traditionally, farmers have sold cattle in a drought year to butchers, mostly Muslims, and bought new ones when their earnings rise after monsoon showers.

That cycle has been broken and could leave farmers with little money to buy seeds or fertiliser ahead of the next sowing season, starting in June.

Farmer suicides have nearly doubled in the drought-hit Marathwada region of Maharashtra.

TO BAN OR NOT TO BAN?

Their predicament is causing concern within the BJP, which has been trying to bolster its credentials in the countryside, where most of India's 1.3 billion people live.

Rural distress contributed to an embarrassing defeat for the party last year in a state election, and more state polls are due over the coming year.

Maharashtra BJP legislator Bhimrao Dhonde said the government's priority should be to support farmers, and they should be allowed to sell their cattle to whomever they want.

"It is time to withdraw the ban," Dhonde told reporters.

Madhu Chavan, a spokesman for the BJP in Maharashtra, said Dhonde's view did not reflect that of the party.

"The party thinks the ban is necessary," he said, adding that more money would be made available to alleviate the effects of drought if needed.

In one district the government imposed rules that prevent assembly of more than five people around a water tanker or borewell to prevent riots. Cows and buffalos need 70 litres of water per day.

Many farmers are simply abandoning their cattle.

The state has opened hundreds of temporary shelters to house around 250,000 heads of cattle until their owners are ready to take them back, but experts say at least another 4 million animals need to be looked after in Maharashtra.

Hindu groups such as the Vishva Hindu Parishad (VHP) that had promised to build shelters said they, too, were short on cash and the government should do more.

Laxmi Narayan Chandak, head of the Maharashtra unit of VHP's cow protection committee, said his organisation has been able to start only one facility that holds 150 cattle.

"Nearly 700,000 cows and bulls ... will starve to death or will be smuggled to slaughter houses. We have to save them," said Chandak.

He added that only pure Indian breeds "that are worthy of worship" should be sheltered.

Every Monday, hundreds of farmers like Choudhary travel to a weekly cattle market in Belhe village, around 200 km (124 miles) east of Mumbai, but with so few people buying, it is more in hope than expectation.

Cattle prices in the state have fallen 40 percent to 60 percent.

"We are forced to depend on tankers for drinking water. How can we supply water to cattle?" Choudhary asked.

© Copyright 2021 Reuters Limited. All rights reserved. Republication or redistribution of Reuters content, including by framing or similar means, is expressly prohibited without the prior written consent of Reuters. Reuters shall not be liable for any errors or delays in the content, or for any actions taken in reliance thereon.
Related News: Maharashtra, Narendra Modi, Bharatiya Janata Party, Vishva Hindu Parishad, Revaji Choudhary
SHARE THIS STORY
Print this article 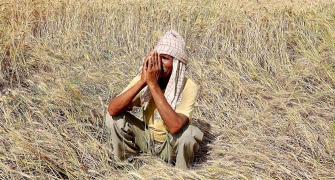 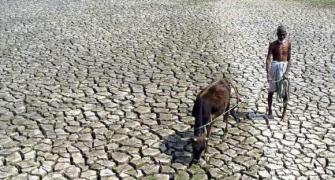 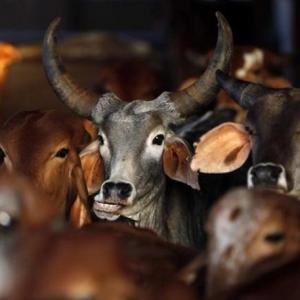 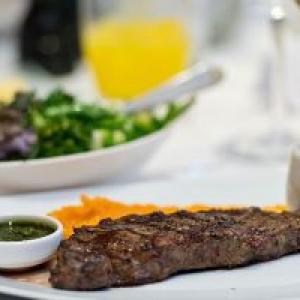