Wholesale price-based inflation hit a 22-month low of 2.45 per cent in May helped by falling prices of food articles, fuel and power items, and this in turn may prompt the Reserve Bank to go for another cut in key interest rates in the current fiscal.

The Wholesale Price Index (WPI)-based inflation was at 3.07 per cent in April this year.

Inflation in food articles basket was 6.99 per cent In May, 2019, down from 7.37 per cent in April, official data released on Friday said. Inflation in pulses continued in double digit for four consecutive months at 18.36 per cent in May, up from 14.32 per cent in the previous month. 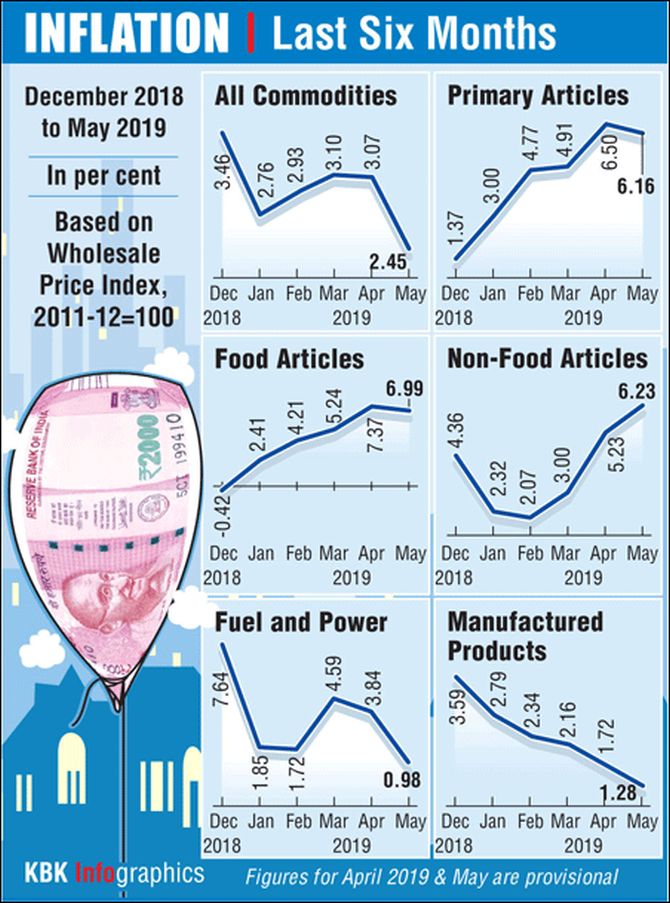 India Ratings & Research principal economist Sunil Kumar Sinha said the core inflation at 1.2 per cent is 29 months low in May 2019.

"This is clearly an indication of weakening of demand impulse in the economy.

“Dwindling auto and FMCG sales growth has been pointing towards this for past several months."

This delayed and less than normal monsoon could aggravate the food inflation further in the coming months lest the government monitors the situation proactively, checks speculative activities and intervenes in the market to stabilise prices, he added.

"India Ratings believes there is still a scope of one more rate cut in FY'20.

“However, besides being dependent on data it will also take into consideration fiscal policy stance of the government," Sinha said.

Inflation in 'fuel and power' category cooled to 0.98 per cent, from 3.84 per cent last month on account of softening of global crude oil prices.

Manufactured items too saw decline in prices with inflation at 1.28 per cent in May, against 1.72 per cent in April.

WPI inflation data for March has been revised downwards to 3.10 per cent from provisional 3.18 per cent.

Data released earlier this week showed retail inflation spiked to a 7-month high of 3.05 per cent in May, on costlier vegetables, and protein-rich items.

The Reserve Bank, which mainly factors in retail inflation for monetary policy decision, on June 6, lowered its benchmark lending rate to a nearly 9-year low of 5.75 per cent, even as it upped its inflation projection to 3-3.1 per cent for the first half of 2019-20.

RBI has cut rates three times in a row since February 2019.