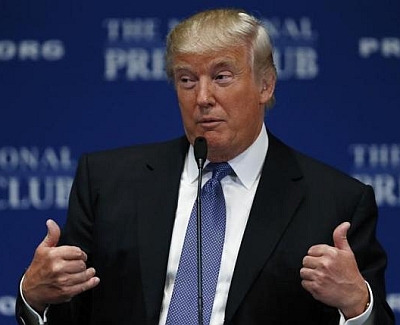 US President Donald Trump has intensified his attack on the US Federal Reserve following this week's plunge in stock prices, saying the central bank is "out of control" in raising interest rates, but ruled out firing its head Jerome Powell.

Trump's remarks on Thursday were the latest in series of recent barrages he has unleashed at the Fed.

The Fed under his hand-picked chairman Powell has been gradually raising rates as the economy has strengthened to prevent a run-up in inflation.

"I think the Fed is out of control. I think what they're doing is wrong. Under the Obama administration, you had a lot of help because they had very little interest," Trump told reporters at the White House Thursday while responding to questions on the down sliding of the stock market for a second consecutive day.

While the Dow Jones Industrial Average fell by 546 points, the S&P 500 tumbled 2.1 per cent and Nasdaq Composite by 1.3 per cent.

"When you talk about economies, our economy is far better than that. But we have actually -- we're paying interest. They weren't. They were using funny money. But I think the Fed is far too stringent, and they're making a mistake and it's not right. Despite that, we're doing very well but it's not necessary, in my opinion. I think I know about it," he said.

At the same time, he ruled out firing Federal Reserve Chairman Powell.

"No, I'm not going to fire him. I'm just disappointed at the clip. I think it's far too fast. Far too rigid, far too fast," Trump said.

The president said the markets were way up over what they were. "It's a correction that I think is caused by the Federal Reserve with interest rates. The dollar has become very strong, which, frankly, people can debate whether or not they like a strong dollar or not," he said.

Asserting that the dollar is very strong and powerful, he said that causes a little difficulty with doing business. "A strong dollar doesn't necessarily mean all good, but we do have a very strong dollar. And we have interest rates going up at a clip that's much faster than certainly a lot of people, including myself, would have anticipated," the US president said.

Trump's criticism of the Fed has raised concerns over its ability to operate free of political pressure.

On Wednesday, Trump said, "The Fed is going wild. I don't know what their problem is. They are raising interest rates and it's ridiculous. ... The Fed is going loco, and there is no reason for them to do it and I'm not happy about it."