Trade pact with Israel 'only when we get a good deal', says Goyal

The proposed India-Israel trade pact should be beneficial to both nations and until New Delhi gets a good deal, it would not do an agreement, Commerce and Industry Minister Piyush Goyal said. 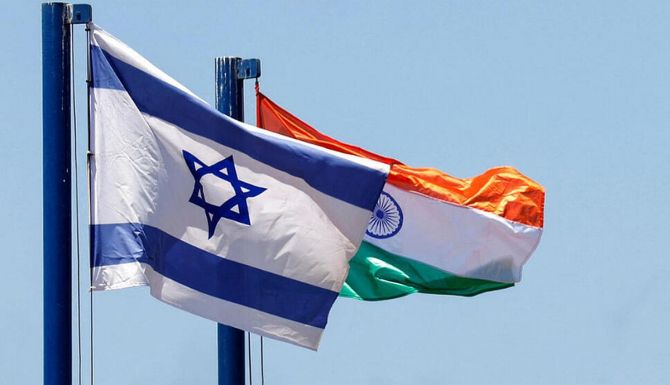 India and Israel are negotiating a free trade agreement (FTA) since May 2010.

"With Israel, until we get a good deal, we will not do an FTA. It has to be reciprocally beneficial," the minister said in San Francisco on Tuesday while interacting with the Indian community.

In a free trade pact, two countries significantly reduce or eliminate customs duties on maximum number of goods traded between them.

Besides, they ease norms to boost trade in services and attract investments.

India has recently signed trade pacts with the UAE and Australia.

"We are in active negotiations with the UK, Canada, the European Union.

"Out of these, the UK would probably happen soon now that the new government is in place there," Goyal said.

Conservative Party leader Liz Truss was on Tuesday formally appointed as Britain's new prime minister. She is the third female premier of that country.

Goyal said active negotiations are going on with several countries on trade pacts.

With the EU, he said as it is a 27-nation bloc, the proposed trade pact with it would probably take a year-and-half or two.

"We have three other sets of countries - the Russian group of five countries, Switzerland and a group of 3-4 countries that are very very keen to do FTA with India.

"I am trying to assess whether Switzerland and other countries bring something substantive to the table which is good for India.

"The (Swiss) minister is coming in a week or two to India, the agenda is FTA.

"Last time, I had kind of conclusively said we are not very keen on this.

Talks with the GCC, he said, are at advanced stage for preparing the scope of the trade pact and negotiations for that may be launched "very soon".

The Gulf Cooperation Council (GCC) is a union of six countries in the Gulf region, namely, Bahrain, Kuwait, Oman, Qatar, Saudi Arabia and the UAE.

Meanwhile, the minister interacted with the venture capitalists in San Francisco.

He encouraged them for deeper engagements and greater partnerships with Indian startups.

Replying to a question on semiconductor sector, Goyal said India offers incentives to companies to set up manufacturing units.

"We are in dialogue with many companies and several of them have shown keen interest in investing in India," he said.

Talking on Open Network for Digital Commerce (ONDC), he said efforts were being made to roll out the initiative in one or more cities soon.

ONDC is a set of standards for voluntary adoption by sellers or logistics providers or payment gateways.

The objective is to democratise the fast-growing e-commerce sector in the country to help small retailers and reduce the dominance of online retail giants.

Joyeeta Dey
© Copyright 2023 PTI. All rights reserved. Republication or redistribution of PTI content, including by framing or similar means, is expressly prohibited without the prior written consent.