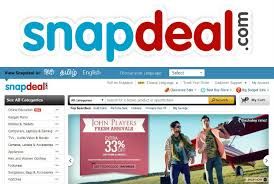 The amount, set to be the biggest investment in India's growing e-commerce sector after Flipkart raised $1 billion in July, is likely to be announced next week, the people said.

The people declined to be identified as they were not authorised to speak to media ahead of an official announcement. Snapdeal and SoftBank declined to comment.

Indian online retailers have been raising funds to expand and compete with bigger rival Amazon.com Inc as more Indians shop on the Internet.

Analysts at Nomura estimated in a research note in July that India's e-commerce industry could quadruple to $43 billion over the next five years from $10 billion in 2013, driven by online retail.

Besides SoftBank, Snapdeal's other investors include eBay Inc, Temasek Holdings Pvt Ltd and Ratan Tata, the former chairman of the Tata conglomerate.