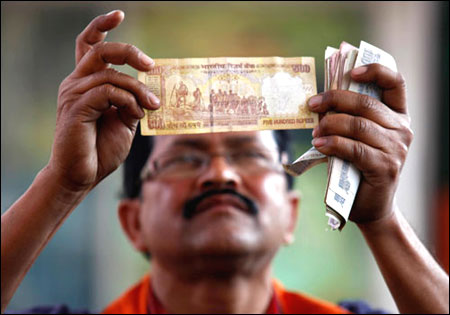 'The counting machine beeped, indicating a counterfeit note.'
'When the teller started tearing it, my nephew stopped him and asked him: Under whose authority was he destroying it, how did he know that the note was fake and if a genuine note gets destroyed, how will he be compensated?'
Harsh Roongta explains the process if you have a counterfeit note.

My namesake and nephew (also Harsh Roongta), who owns and runs a stock broking and financial planning entity, had a very curious experience recently.

He was standing in the line of his bank to deposit some of the old Rs 500 and Rs 1,000 notes when he saw the teller tear off a few notes being deposited by the person in front of him.

"They are counterfeit and need to be destroyed," the teller said.

When his own turn came to deposit, the counting machine beeped once again indicating a counterfeit note.

When the teller again started tearing it, my nephew stopped him and asked him pointed questions: Under whose authority was he destroying it, how did he know that the note was fake and if a genuine note gets destroyed, how will he be compensated?

In response, the teller became aggressive and claimed that he had no right to ask questions, as he was depositing a fake note. However, my nephew stood his ground.

When he showed the teller a circular by the Reserve Bank of India, which stated that a bank had to impound any counterfeit note and issue a receipt to the client depositing the note, the bank manager intervened.

But even the manager, much like the teller, had no idea about the guidelines. He simply gave the partially torn note back.

When my nephew visited the RBI and met a deputy general manager, he was told the entire procedure.

The apex bank has laid out an elaborate procedure to deal with such notes.

In fact, its instructions clearly provide that 'in no case, the counterfeit notes should be returned to the tenderer or destroyed by the bank branch.'

Anecdotal feedback suggests that tearing up of fake currency is common across many banks.

Customers wouln't want to go through the trouble of a police investigation while banks would like to avoid extra paperwork.

So, destroying notes is a win-win situation for both.

Maybe it's for the RBI to find out if banks are indeed doing so as they are destroying critical evidence because of sheer laziness.