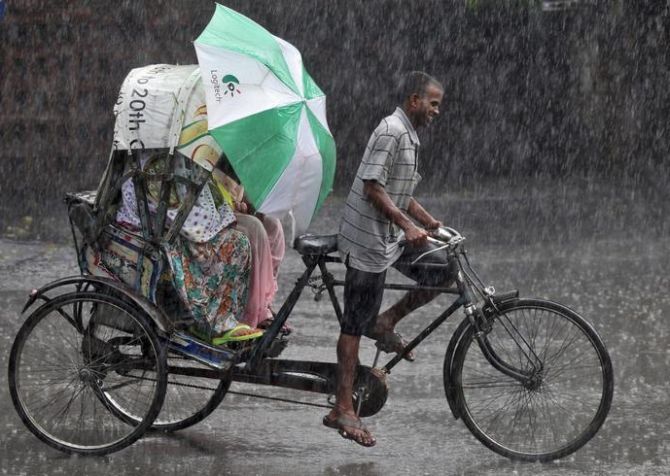 After a three-week delay, the southwest monsoon has started withdrawing from the Northeast, said the India Meteorological Department (IMD). There is an overall shortfall of 5 per cent in rain till now.

The retreat of the rains usually starts in the first week of September.

Till Wednesday, almost 34 per cent of the country’s 660 districts had received deficient rain; many of these were staring at a drought.

“In view of the establishment of an anti­cyclone in the lower tropospheric levels, substantial reduction in moisture content and dry weather prevailing over the region, the southwest monsoon has withdrawn from some parts of Punjab, Haryana, most parts of west Rajasthan, some parts of Kutch and north Arabian Sea, today (Wednesday),” the IMD said in its weather update.

According to the Met department, out of the 660 districts in the country, the southwest monsoon this year from June 1 to September 27 was normal, excess or large excess in 414 (around 66 per cent of them), while it was deficient in 216 of them.

There was no data available for 30 districts (around 34 per cent).

Overall, till September 27, India received around 827.4 mm rainfall since June 1. This was 5 per cent less than normal.

The monsoon started on a brisk note in June and maintained its pace in July, but thereafter it went for a big break over Vidharbha, parts of Madhya Pradesh, and also Uttar Pradesh, impacting the standing oilseed, cotton and pulses crop.

The shift in acreage due to better prices towards crops such as cotton was not expected to lead to any big jump in output, as the elongated dry weather impacted yields.

However, a clearer picture will emerge in the coming months, when final harvest starts hitting the market as the first estimate is just a rough calculation based on area covered.

However, these are preliminary estimates and would undergo revision based on further feedback from the states,” the government said in a statement released earlier this week.

In case of some crops like cotton, the total production is expected to be 2.47 per cent less than last year despite a higher acreage due to poor rains in main growing areas.

Production of pulses in the kharif season of 2017-18 as per the first advanced estimate is pegged at 8.71 million tonnes, which is 7.53 per cent less than fourth estimate of last year, but again less than a per cent lower than the first estimate of 2016-17.

The monsoon, which delivers 70 percent of India's annual rainfall, is critical for 263 million farmers and their rice, sugarcane, corn, cotton and soybean crops because nearly half of the country's farmland lacks irrigation.

The water levels in 91-odd reservoirs of the country till September 21 — the last available data was 96.952 billion cubic meters (BCM), which was 61 per cent of total capacity.