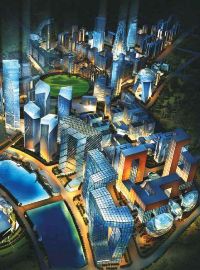 The government of Singapore has sought clarity on India’s concept of smart cities, even as it expressed keenness to invest in Prime Minister Narendra Modi’s grand plan of creating 100 such cities across the country.

A government official said Singapore had committed assistance in creating some of the smart cities, it is still in the process of ‘understanding what the (Indian) government actually means by a ‘smart city’, as in whether they want a city to be information technology-enabled or having a state-of-the-art connectivity’.

A state-of-the-art city is a much larger concept than being IT-enabled, as the former addresses social, economic and environmental concerns as well. IT-enabled services would comprise only five per cent of a smart city of the kind being debated in India.

The official said Singapore is globally regarded as a smart city but the government believes it to be a ‘garden city’.

He said India needs to address the basic fundamentals of so-called smart cities in terms of sustainable and clean environment, a sound regulatory framework and a robust land bank.

This matter was discussed extensively during the visit of K Shanmugam, Singapore’s foreign minister, to India last month and also during external affairs minister Sushma Swaraj’s visit to that country.

The Singapore government has also made it clear that it will not be able to help India in creating 100 cities like that but might help in a couple of them, which can be further replicated, based on the needs and requirements of the particular state where they will come up.

For example, there is the iconic Tianjin Knowledge City, which got replicated into Suxhou, Guangzhou and Sichuan in China.

Besides, the official said, cost of creating such cities is another issue depending from state to state.

It can take more than a billion dollars to build only one smart city, according to some estimates.

The government has allocated about Rs 7,000 crore (Rs 70 billion) so far for the creation of smart cities.

This is likely to go up as and when investors, both domestic and international, pour in more money.

Gopinath Pillai, chairman, Institute of South Asian Studies at the National University of Singapore, said, “There is lack of clarity in India regarding the concept of smart cities.

“The government has to elaborate what it actually wants. “They should go into the depth of it. Land management has to be done very carefully.”

Modi said in a recent speech that countries are not built on river banks anymore but along highways, with availability of optical fiber networks and next-generation infrastructure.