Indian IT companies like Tata Consultancy Services, Infosys, HCL Technologies and others have taken the buyback route to return some wealth to their shareholders, while potentially boosting their stock prices.

The government's decision to not levy 20 per cent tax on buyback programmes of companies that had announced the move before July 5 will spell a major relief for IT giants Infosys and Wipro, and other companies.

In July, the government, as part of the Budget, had announced a 20 per cent tax on share buyback by listed companies - a move that would have hurt IT services firms that often opt for the route to return surplus cash to shareholders.

However, as part of its efforts to pull the economy out of a six-year low growth, the government on Friday said no tax will be charged on share buyback by listed companies that announced such a move prior to July 5.

"Clarification on grandfathering of buyback tax on inflight buyback programs as of July 5, 2019 is a comforting outcome.

“This would go a long way in restoring confidence in the market and nudge companies to make fresh investments," he added.

Wipro had announced a Rs 10,500-crore buyback programme in June this year that started on August 14 and closed on August 28.

Similarly, Infosys had announced in January that it would buy back shares of the company for an amount aggregating up to Rs 8,260 crore.

The buyback commenced in March and closed in August.

The company, however, did not respond to the matter.

Industry body Nasscom also welcomed the clarification from the government stating that the move "should help the listed companies that had not factored the buyback tax when the scheme was announced".

Indian IT companies like Tata Consultancy Services, Infosys, HCL Technologies and others have taken the buyback route to return some wealth to their shareholders, while potentially boosting their stock prices.

The Indian IT companies have been under pressure to return excess cash on their books to shareholders through generous dividends and buybacks.

TCS has undertaken two buyback programmes - of Rs 16,000 crore each - in recent years.

Apart from these big players, other Indian IT firms like HCL Technologies and Mphasis have also returned surplus cash from its books to shareholders in the form of buyback and special dividends. 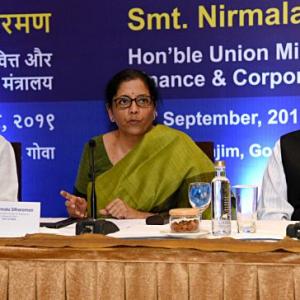