Indian service sector output broadly stabilised in September but remained in the contraction zone as incoming new business fell moderately due to the damaging impact of the pandemic on demand, leading to more job losses, a monthly survey said on Tuesday. 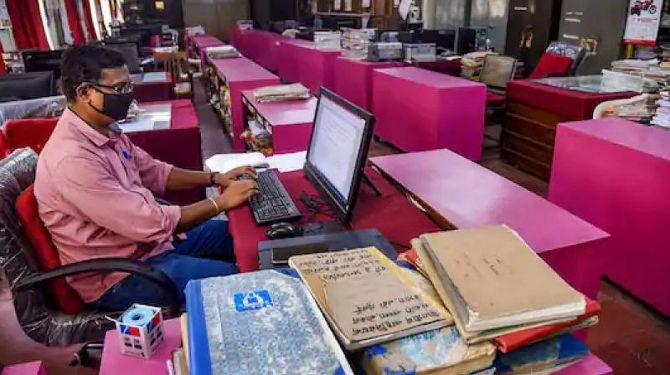 The seasonally adjusted India Services Business Activity Index rose for the fifth straight month in September to 49.8 from 41.8 in August.

However, the Indian services sector activity contracted for the seventh successive month in September.

A print above 50 means expansion and a score below that denotes contraction, as per the IHS Markit India Services Purchasing Managers' Index (PMI).

"The relaxation of lockdown rules in India helped the service sector move towards a recovery in September.

Monitored companies that observed growth commented on the reopening of business units amid the loosening of lockdown rules.

While, firms that reported a contraction mentioned the damaging impact of the pandemic on demand, the survey said.

On the job front, the services sector witnessed decline in employment for the seventh month in a row, as per the survey.

"Payroll numbers decreased further, but several firms reported that attempts to take on extra workers were hampered by a lack of available labour," Lima said.

"Backlogs data suggest that hiring efforts will continue in the near term, however, so we could see a better employment trend in coming months provided that people are willing to leave their hometown in search for vacancies," she added. The overall rate of inflation was at a seven-month high.

Going ahead, firms are optimistic regarding growth prospects.

"In line with hopes that a vaccine for COVID-19 will be rolled out, companies were optimistic about the year-ahead outlook for business activity.

“September marked the first month since April in which service providers were confident towards growth prospects," the survey said.

Meanwhile, the Composite PMI Output Index, which measures combined services and manufacturing output rose from 46.0 in August to 54.6 in September, signaling a marked rate of activity growth across the private sector economy.

"Taking into account the performance of the manufacturing industry, a better picture of the Indian economy is painted.

“Private sector output expanded for the first time in six months during September, while the increase in sales was the first since February," Lima said.

Lima further said the news will be welcomed by policymakers, particularly following the pandemic related 23.9 per cent contraction in GDP in the opening quarter of fiscal year 2020/21.