Equity indices made an emphatic comeback on Friday after falling for seven straight sessions after the RBI hiked interest rates by 50 basis points on expected lines and projected inflation coming under control from January next year. 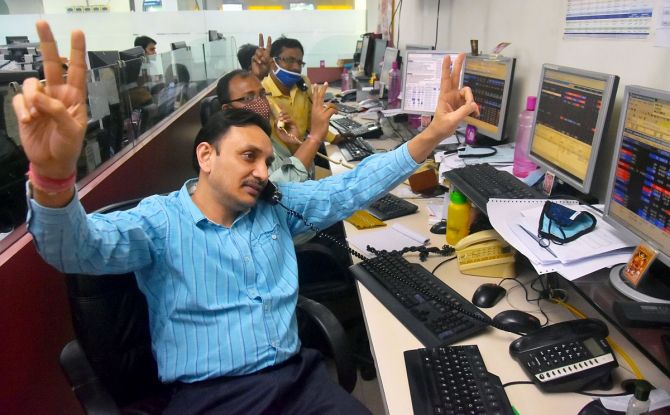 A strong recovery in the rupee added to the momentum, traders said.

However, Asian Paints, Dr Reddy's, ITC, Tech Mahindra and Hindustan Unilever were the laggards, dropping up to 1.26 per cent.

The Reserve Bank of India (RBI) on Friday raised benchmark lending rate by 50 basis points -- the fourth straight increase since May -- as it extended its battle to tame stubbornly high inflation.

The Monetary Policy Committee (MPC) raised the key lending rate or the repo rate to 5.90 per cent - the highest since April 2019.

Since the first unscheduled mid-meeting hike in May, the cumulative increase in interest rate now stands at 190 basis points and mirrors similar aggressive monetary tightening in major economies around the globe to contain runaway inflation by dampening demand.

The RBI retained its inflation projection for FY23 at 6.7 per cent amid geopolitical concerns triggered by Russia-Ukraine war, and expects inflation to be under control from January.

The central bank is mandated to keep retail inflation in a band of 2-6 per cent.

"An in-line rate hike along with the RBI's confidence in the economy's growth momentum aided the domestic market to alter the seven-day losing streak.

"The decision to retain inflation forecast at 6.70 per cent with a marginal cut but a healthy GDP forecast of 7.0 per cent indicates the resilience of the Indian economy.

"Although the commentary warned about prevailing risks to the domestic economy from the global economy, the MPC refrained from sounding very hawkish," said Vinod Nair, head of research at Geojit Financial Services.

Santosh Meena, head of research at Swastika Investmart Ltd, said the 50 bps rate hike by the RBI was in line with expectations.

"The key highlights were the resilience shown by the Indian economy considering the turbulent global environment and concerns emanating from global growth slowdown and hawkish stances of various central banks," he added.

In the broader market, the BSE smallcap gauge jumped 1.45 per cent and the midcap index climbed 1.39 per cent on Friday.

Foreign institutional investors offloaded shares worth a net Rs 3,599.42 crore on Thursday, according to data available with BSE.