Sebi on Wednesday imposed a total penalty of Rs 25 crore on Mukesh Ambani, Anil Ambani, other individuals and entities for non-compliance with takeover norms in a Reliance Industries case dating back to 2000. 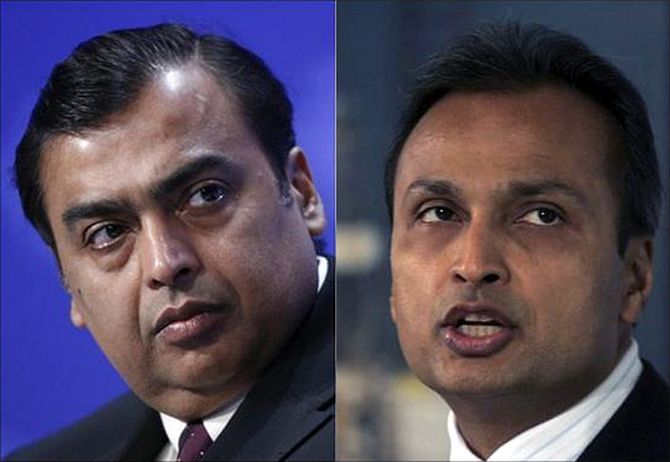 RIL's promoters and Persons Acting in Concert (PAC) failed to disclose the acquisition of more than 5 per cent stake in the company way back in 2000, Sebi said in its 85-page order.

In 2005, Mukesh and Anil had split the business empire built by their father Dhirubhai Ambani.

As per the order, RIL's promoters acquired 6.83 per cent stake in the company during 2000 through conversion of 3 crore warrants issued to them back in 1994.

Sebi noted that 6.83 per cent shares that were acquired by RIL promoters together with PACs consequent to exercise of option on warrants attached with non-convertible secured redeemable debentures were in excess of ceiling of 5 per cent prescribed under the takeover regulations.

Thus, the obligation to make a public announcement about acquiring the shares arose on January 7, 2000.

This was the date on which the PACs were allotted RIL equity shares on exercise of warrants issued in January 1994, the order noted.

However, Sebi found that the promoters and PACs have not made any public announcement for acquiring the shares.

Since the promoters and PACs have not made any public announcement for acquiring shares, it is alleged that they have violated the provisions of the takeover regulations.

Under Sebi norms, a promoter group acquiring more than 5 per cent of the voting rights, in any financial year ending March 31, is required to make an open offer to minority shareholders.

"No quantifiable figures or data are available on record to assess the  disproportionate gain or unfair advantage and amount of loss caused to an investor or group of investors as a result of the default committed by the noticee," the Securities and Exchange Board of India (Sebi) noted.

"However, the fact remains that the noticees by their failure to make public announcement deprived the shareholders of their statutory rights/ opportunity to exit from the company," it added.

The penalty of Rs 25 crore has to be paid jointly and severally, by the individuals and entities concerned, as per Sebi order.

In the case, there were 34 noticees, including entities that have now merged with Reliance Industries Holding Pvt Ltd.

In the case of Dattaraj Salgaokar, the fine is on him and minor noticees -- Vikram and Isheta.

The regulator noted that at least 17 entities, that were among the noticees, have merged with Reliance Industries Holding Pvt Ltd.als and entities concerned.