BMS, a union affiliated to RSS, plans rally at Delhi's Ramlila Ground on Nov 17; SJM to protest on Oct 29. 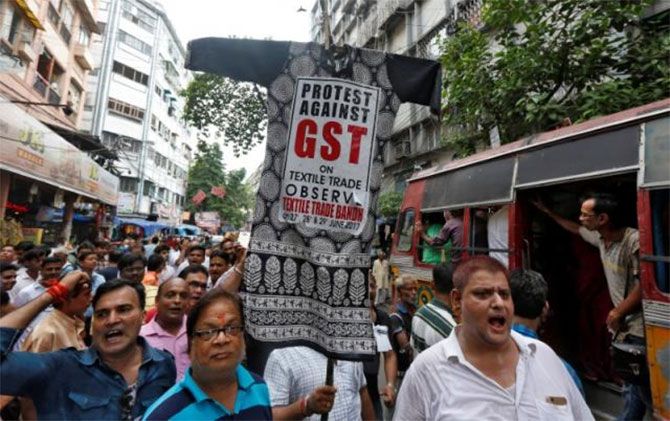 In an effort to provide a vent to the criticism building against the Narendra Modi government's economic policies from within the Sangh Parivar and also internalise the opposition, Rashtriya Swayamsevak Sangh affiliates plan to not only up the ante on the issues of economic distress but have also reached out to groups outside of the Sangh Parivar to be part of their protests.

The Bharatiya Mazdoor Sangh, a trade union affiliated to the RSS, has planned a public rally at Delhi's Ramlila Ground on November 17. The Swadeshi Jagaran Manch (SJM), an RSS affiliated think tank on economic policies, has announced a protest on October 29.

In a first, the SJM has asked several farmers' and traders' outfits to be part of the October 29 protest in New Delhi.

On Tuesday, SJM said the protest would appeal to people to boycott Chinese goods since their sale impacts the indigenous small and medium industries.

But the protest would also highlight the growing joblessness and the plight of the small and medium enterprises (SME) sector because of twin blows of demonetisation and Goods and Services Tax (GST) rollout.

Bharatiya Kisan Union-Tikait, Bharatiya Krishak Samaj and Kisan Mahapanchayat leaders were present at the press conference. Bharatiya Udyog Vyapar Mandal, a traders' body, has also extended support and so has the PHD Chamber of Commerce of Industry.

At the event, Kisan Mahapanchayat chief Rampal Jat criticised the Bharatiya Janata Party and the government for pursuing identity politics, but giving no heed to farm distress. He said the Modi government was anti-farmer.

SJM convener Ashwani Mahajan said the campaign will also have the support of yoga guru Ramdev, parliamentarians and industrialists.

"We also want the government to come out with data on job creation in the states where labour reforms have been carried out," BMS organising secretary Pawan Kumar said.

Kumar said the BMS has also demanded representation to farmers and workers organisations in the NITI Aayog, an end to "curtailing of labour rights in the name of labour reforms" and stop disinvestment.

"What has hurt working class the most is the State Bank of India's decison to keep the minimum deposit in bank accounts at Rs 3,000. Would the poor maintain minimum balance or maintain their family?" Kumar asked.

Since June, several farmer organisations, including some affiliated to the Sangh Parivar, have come together to carry out sustained protests across the country to demand that BJP-led government at the Centre fulfill its promises to deal with agrarian distress in its 2014 manifesto.

The SJM and BMS protests would come on the heels of criticism of the Centre's economic policies from within the Sangh Parivar.