So far this month, another $4.5 billion (Rs 33,000 crore) has flown into domestic stocks.
Sundar Sethuraman reports. 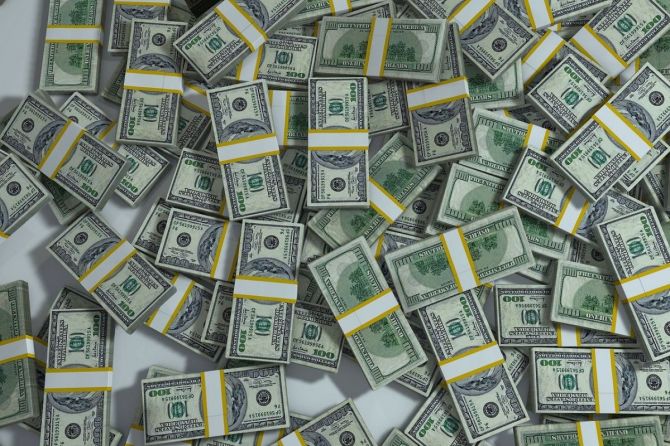 The domestic equity markets have seen an unprecedented liquidity gush, underpinned by the weakening of the dollar and aggressive monetary and fiscal stimulus undertaken by global authorities.

Investments by foreign portfolio investors (FPIs) have topped the $20 billion mark -- the most since 2012 in dollar terms.

In local currency terms, at Rs 1.5 trillion, overseas investment into equities has surpassed the previous high of Rs 1.33 trillion in 2010.

Interestingly, over $14 billion has flown into domestic stocks since November, propelling the markets by 18 per cent.

The increase in the pace of foreign inflows has coincided with the US election results and talks among US congressional leaders for another stimulus deal.

Also, the rapid progress on the COVID-19 vaccine front has further fuelled the optimism and raised hopes of the economy returning to normalcy by the middle of next year. 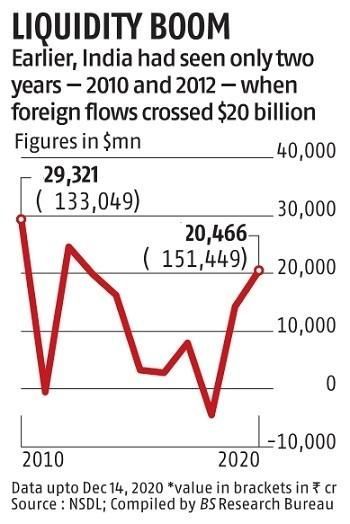 "The flows -- especially in the last three months -- were on account of American pension and endowment funds inability to deliver returns, and they had to come to countries like India. Most of these funds have their corpus in fixed income products. With the US 10-year bond yields remaining close to zero, more funds can be encouraged to look at emerging markets," said Saurabh Mukherjea, Founder Marcellus Investments.

The MSCI's move to raise India's weighting, following a tweak in the FPI shareholding, has led to the country getting a far bigger share of flows that chase emerging markets.

Another index provider FTSE also is expected to increase India's weighting, which may lead to more inflows, said experts.

Besides, the improvement in domestic macro indicators and better-than-expected September quarter earnings have resulted in equity pundits raising index targets.

"The pessimism in Q1FY21 was quickly addressed by the pent-up demand that came in Q2 and which was visible in the earnings revival and also by the management commentaries," said Arjun Yash Mahajan, head-institutional business, Reliance Securities.

"FPIs are attracted to India because of the broad number of sectors we offer. It's helpful to FPIs if they want to play a global growth story across different sectors. We have a health care industry, which has been a big beneficiary from the Covid pandemic," said Andrew Holland, CEO, Avendus Capital Alternate Strategies.

"Asia, led by China, will be the growth story for the next five years. A lot of money will flow to Asia, and some of it will come to India. A lot depends upon how quickly GDP is going to grow," said Holland.

"And we have to see if government reforms would pay off. And whether companies will move from China to India and how successful the privatisation is."