News
Business
Movies
Sports
Cricket
Get Ahead
Money Tips
Shopping
Sign in  |  Create a Rediffmail account
Rediff.com  » Business » Rs 42,000 crore and counting! Jan Dhan is not just a 'Re 1 trick'

As many as 24.27 crore accounts have been opened under the scheme and the percentage of zero balance has come down to 24.43 per cent 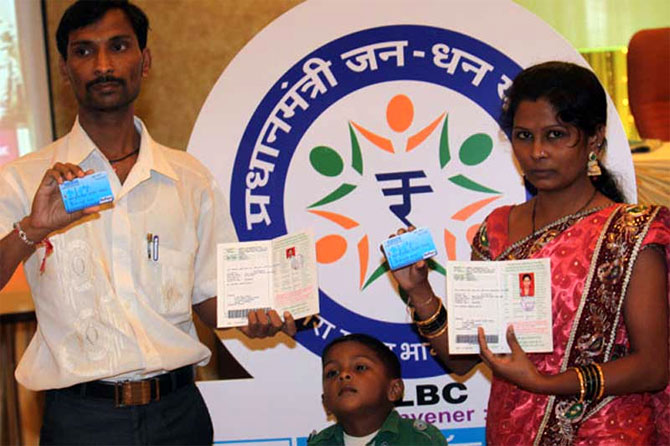 Amid Opposition's criticism of alleged manipulation in Jan Dhan figures, government officials, on Tuesday, said deposits under this flagship financial inclusion scheme have crossed Rs 42,000 crore-mark and the percentage of zero-balance accounts has fallen below 25 per cent.

Since April, there has been an addition of about Rs 6,000 crore under the Prime Minister Jan Dhan Yojana (PMJDY).

At the beginning of the financial year, the deposit base was about Rs 36,000 crore and it increased to Rs 42,504 crore as on September 7.

The balance in Jan Dhan accounts has been steadily rising and the government will use such accounts for direct benefit transfers with a view check pilferage, officials said, while adding that these balances have stayed with the banks for a long time.

As many as 24.27 crore accounts have been opened under the scheme and the percentage of zero balance has come down to 24.43 per cent.

"No target has been set for reduction of zero balance account, instead strategy is that these accounts are ready for DBT purpose and ensure that there are banking trails for various transactions," they said.

Besides, the objective is to inculcate banking habits among unbanked population, officials added.

There were reports that some bankers have deliberately deposited small amount in PMJDY accounts so that they do not remain under the category of zero balance.

The Congress, on Tuesday, latched on to the reports of "sly game" of depositing Re 1 to reduce the number of zero-balance Jan Dhan accounts to accuse the Modi government of "fooling the nation" through "lies, deceit and trickery".

"Rhetoric and 'jumlas' have become the sole hallmark of his government. The prime minister seems to be buying the loyalty of people at the rate of Re 1," the party said.

PMJDY, a national mission on financial inclusion, was announced by Prime Minister Narendra Modi in his Independence Day - 2014 speech and was formally launched by him on August 28 of the same year with the main objective of covering all households with at least one bank account per household across the country.