Economist Nitin Desai feels we need a blueprint for universal health care and pensions to help the vulnerable section. 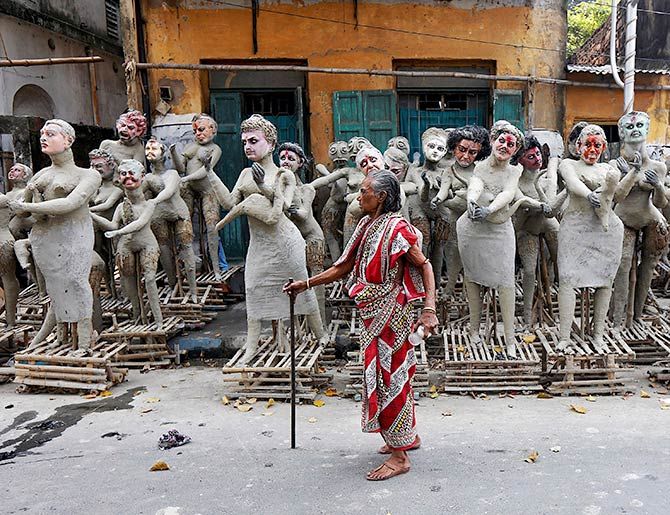 IMAGE: All Indians need access to Universal Basic Income, if need be, feels Nitin Desai. He says one of the reasons is because traditional Indian support systems are often quite demeaning, particularly for the elderly. And maybe so too for this old woman in Kolkata. Photograph: Rupak De Chowdhuri /Reuters.

Recently a seminar organised by the Institute for Human Development in Delhi discussed the proposals for a Universal Basic Income put forward by economists Pranab Bardhan and Vijay Joshi, whose presence at the seminar added greatly to a better understanding of their ideas.

The seminar also had sessions on the treatment of this topic in this year’s Economic Survey and field-level concerns.

The dissatisfaction with the misdirection of subsidies in social welfare schemes, and the high-level of “demerit” subsidies that go to better-off sections of the population, figured prominently in the discussion. 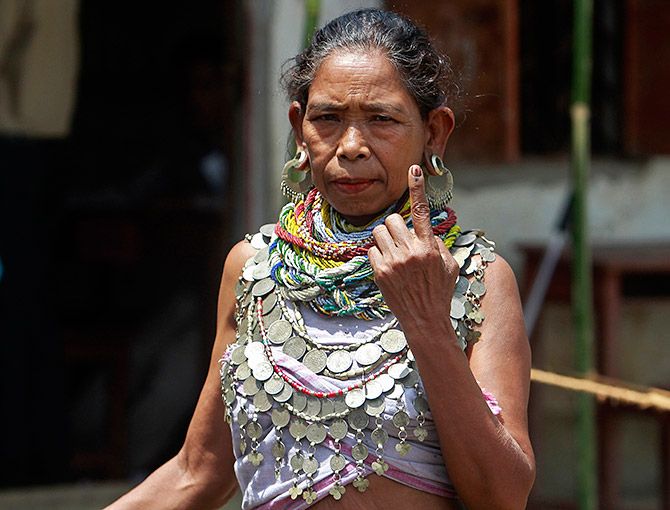 IMAGE: "From a welfare perspective we should look for empowerment and a sense of agency for women, tribals (like this Tripura tribal woman from Dhalai district), Dalits, minorities," says Nitin Desai. Photograph: Jayanta Dey/Reuters.

What Mr Joshi called “deep fiscal adjustment” was sometimes advanced as a reason for replacing the existing subsidies, merited or not merited, with a UBI.

There was some discussion of how, in addition to the gains from the reduction in demerit subsidies, the resources required for a UBI could come from raising the tax/GDP ratio, disinvestment,and rationalisation of fiscal sops, which, it was argued, gives fiscal headroom of about 10 per cent of GDP.

The need for exceptions was recognised and this interestingly included the MGNREGA, the principal vehicle for income subsidy at present.

It was also accepted that spending on public services such as education and health must be protected, though one sensed a divide of sorts between those who would give priority to such merit good expenditures and those who preferred to enhance the agency of households/individuals to choose from. (For the latter group, are education and health vouchers the next step after the UBI?). IMAGE: Nitin Desai wonders if an unconditional cash transfer, of a few thousand rupees, per head, per year, under a UBI, would safeguard India's weaker sections of population or be an improvement on the present welfare system of goods and services provided under certain schemes. For instance under the present system pregnant women, like this young woman from Sindri, 300 km north of Kolkata, can receive Rs 6,000 under the Pregnancy Aid Scheme. Photograph: Parth Sanyal/Reuters.

An undertone in the discussion was the disquiet about patron-client politics where subsidies are used by parties to preferentially favour their vote-banks.

There was a slightly surreal discussion of implementation issues such as individual versus household entitlement, monthly or yearly payments, transfers through bank accounts or mobile wallets as if the implementation of a UBI is imminent.

My concern is that much of the discussion on financing, design and implementation issues deals with matters that should be taken up after we come to the judgement that a UBI is the appropriate way to pursue social security in India. 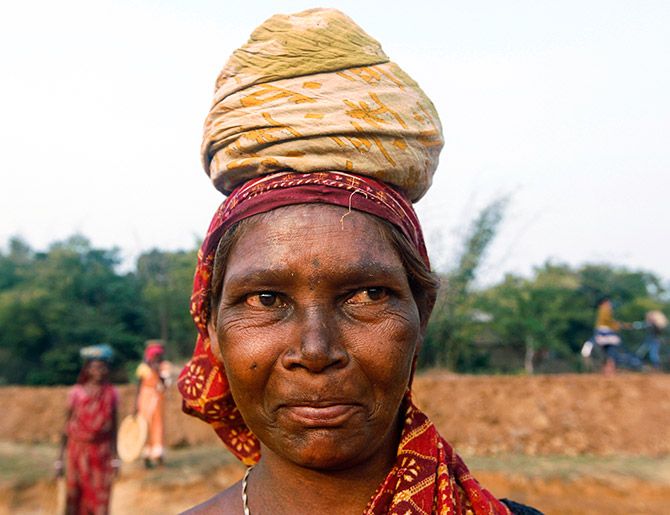 IMAGE: UBI or MGNREGA? Which would finally benefit those without an income, like Kiran Mallick, 53, who works at a road construction site, under Mahatma Gandhi National Rural Employment Guarantee Act, in Paschim, Medhinapur district, West Bengal? Photograph: Rupak De/Reuters.

The case for a UBI should rest on its impact on household economic security, a point stressed by Bardhan.

In our fractured and fractious society, protection against social discrimination must also be considered and from a welfare perspective we should look for: 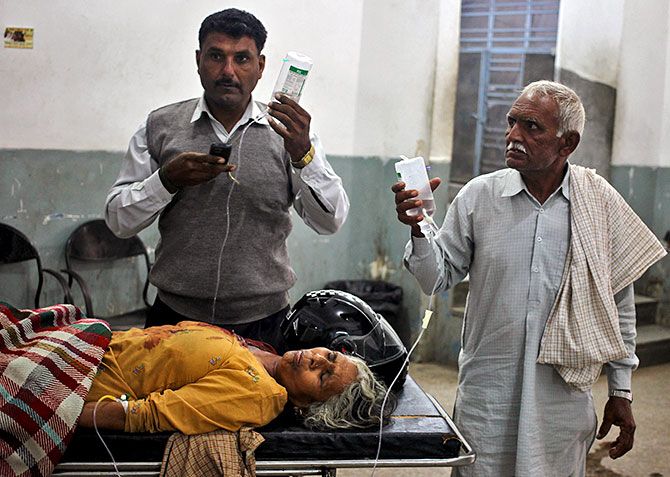 The question that needs to be asked is whether an unconditional cash transfer, of a few thousand rupees, per head, per year, would help achieve these goals.

From the perspective of a poor and vulnerable household would this be an improvement if it replaces all or most of the present welfare system of goods and services provided in kind (for example subsidised grains), employment programmes (MGNREGA), targeted welfare programmes (for the girl child, pregnant women, the disabled), conditional subsidies (means tested scholarships), targeted insurance schemes (for crop failure or health care), affirmative action (job reservation), anti-discrimination laws, and so on?

Is a UBI the answer to this? 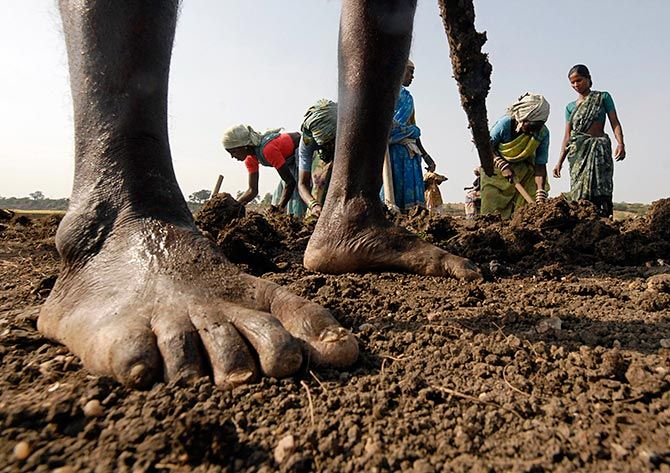 At present, individuals cope with unemployment, large health expenditures, old age and other emergencies mainly by falling back on traditional support systems -- go back to your village home when you lose a job, draw support from relatives and friends for sudden expenditure demands for health crisis and other emergencies, rely on children for old-age support, and so on.

These traditional systems were often quite demeaning, particularly for old age as one can see in the widows exiled to Varanasi and Vrindavan to live off charity.

The Centre and states do provide some protection from economic vulnerability. But much more needs to be done.

With urbanisation, industrialisation and migration, people will lose the traditional safety nets of an extended family. We will need a state-supported social safety net that rests on entitlement and not bureaucratic discretion.

But entitlements can be conditional on meeting a means test or some social or geographical criteria of vulnerability and need.

Judging by international experience we need to double our social protection expenditure to 5 per cent of GDP as soon as possible and assume that this will rise steadily 10 per cent plus as we become an urbanised, industrialised, upper middle income country. The calculations made to show that fiscal headroom can be made available for a UBI suggest that we can afford a universal entitlement-based social protection system. 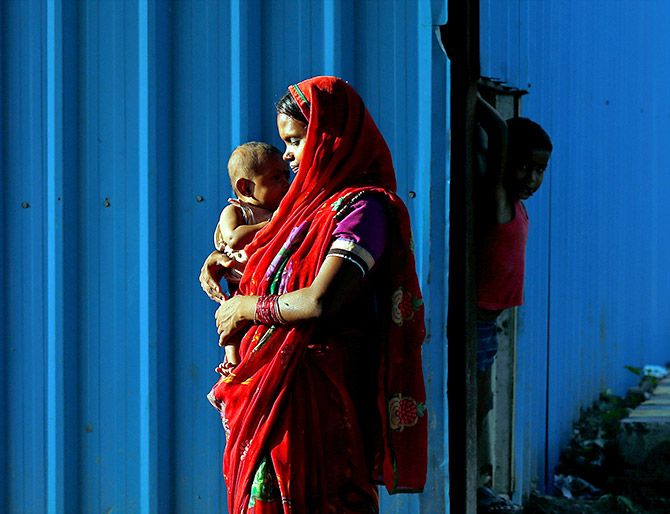 IMAGE: "Judging by international experience we need to double our social protection expenditure to 5 per cent of GDP as soon as possible and assume that this will rise steadily 10 per cent plus as we become an urbanised, industrialised, upper middle income country," says Nitin Desai. Such an outlay will make sure no one is left behind, be it this Delhi woman construction worker or the aged or sick. Photograph: Cathal McNaughton/Reuters.

One must also ask how one can get from here to there.  Today’s schemes have beneficiaries who have gotten used to them and political patrons who derive their support from them. A beginning can be made by consolidating existing schemes where possible, shifting to direct cash transfers of cash benefits, rationalising the delivery mechanism so that the targeted household or individual has one point of contact for establishing entitlement and getting what is due from the plethora of schemes and agencies.

What we need is not an overly simple UBI scheme. But a blueprint for universal health care, old-age pensions, unemployment insurance and social assistance to help the vulnerable as components of a coherent and integrated system. This task is as complex as the GST and perhaps as important for national unity and even more important for deepening our democracy.

Nitin Desai is an Indian economist and civil servant. He can be reached at nitin-desai@hotmail.com.