All directors, key officials, and shareholder speakers will be visible and audible and thousands of shareholders, including those from the US, UK, Canada UAE, Japan, HongKong, Singapore, Malaysia, and Australia, will be able to post their questions and eVote on resolutions. 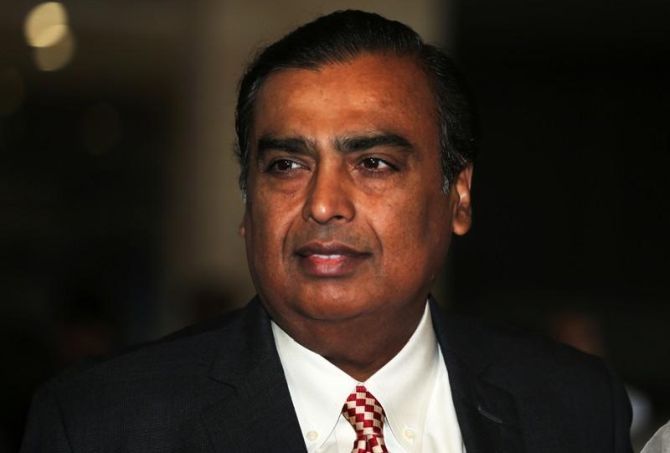 Reliance Industries, India's most valuable company, will hold its first online AGM on Wednesday and it promises to be a much bigger affair with a brand-new virtual platform that can log more than 1 lakh shareholders from 500 locations simultaneously.

Reliance had so far held all in its annual general meeting (AGM) physically with shareholders outside Mumbai unable attend the annual event.

They can now simply log into the event live, can listen to the plans and initiatives and comment and participate too, company sources said.

For easy onboarding of its shareholders, RIL has launched an educative Chatbot via Whatsapp number +91-79771-11111 to nuance processing of logging in, asking questions and voting on the resolution.

The Chatbot is equipped to answer queries and guide shareholders, prospective investors, media, and general public with accurate and immediate information on the AGM.

A Chatbot works as 24x7 helpdesk, but this one can handle 50,000 querists simultaneously via conversational text and video, they said.

The AGM on July 15 will showcase multiple first on a real-time basis - including a two-way live streaming and a brand-new virtual platform that enables more than 1 lakh shareholders from 500 locations, in India and overseas, to log in simultaneously, they added.

The Chatbot, which debuted during Reliance's mega Rs 53,124 crore rights issue, is powered by Jio Haptik.

The company that is widely credited with having launched the equity culture in India, held AGMs in stadiums during times of its founder Dhirubhai Ambani.

In 1985, 12,000 of them attended the Reliance AGM at the Cooperage Football Ground in Mumbai's Colaba.

The next year, around 35,000 attended it at the city's Cross Maidan.

And now the upcoming AGM will be virtual, where shareholders will be able to watch the AGM, ask questions to the chairman and vote - all aided by technology, in line with RIL's current focus, the sources said.

By going online, RIL is bringing together its highly widespread shareholding of 26 lakh.

In addition to shareholders in India, those in other countries like the US, UK, Canada UAE, Japan, Hong Kong, Singapore, Malaysia, and Australia will log in, they said.

Platforms and capabilities to stitch the mega-AGM include video conferencing, the Jio Meet platform, Cisco Webex, and commercial webcast.

All directors, key officials, and shareholder speakers will be visible and audible and thousands of shareholders will be able to post their questions and eVote on resolutions.

But the oil-to-telecom conglomerate achieved net-debt free status last month itself on the back of a record fundraising from stake sales and rights issue.

Reliance secured over Rs 1.18 lakh crore from global tech investors, including Facebook, by selling 25.24 per cent of its digital business and raised Rs 53,124 crore by selling shares to existing investors.

Taken together with last year's sale of 49 per cent stake in fuel retailing venture to BP Plc of UK for Rs 7,000 crore, the total fund raised is in excess of Rs 1.75 lakh crore, the company had said last month.

"With these investments, RIL has become net-debt free," it had said.

At the last AGM, Ambani had also announced plans to sell a $15 billion stake in his group's oil-to-chemical business to Saudi Arabian Oil Co but the deal has got slightly delayed.