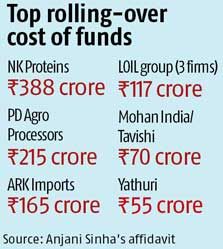 A forensic audit commissioned by the Forward Markets Commission has found National Spot Exchange Ltd gave away Rs 1,700 crore as returns during its life span.

According to regulatory officials, this sum, around 30 per cent of the Rs 5,600 crore (Rs 56 billion) the exchange owes to 13,000 investors, was paid using the money brought in by new investors, as trades on the platform did not generate actual returns.

“An unpermitted financing scheme was being run on the NSEL platform, wherein NSEL was allowing the defaulting buyers to get more money and fresh money was being brought in to ensure the earlier members were not exposed,” said a senior regulatory official.

In negotiations with the aggrieved investors over the past few weeks, the exchange’s promoters, led by Jignesh Shah, have asked them to take a hair-cut. But investors have not agreed to this which has caused a deadlock.

Now, the settlement of investors’ dues could not be completed, unless there was a decision on who would foot this Rs 1,700-crore (Rs 17-billion) bill, the officials said.

Asked by Business Standard if NSEL had taken any decision on how to generate this sum, a spokesperson of the exchange indicated NSEL was not responsible for the repayment.

“This is not correct.

When an old investor exited, he exited with returns. His returns were funded by new investors, instead of defaulters.

This way, the old investor got the returns; it’s not NSEL that got the money.

In a way, old investors enjoyed the financing

Now, it is part of the defaulting members’ dues,” the spokesperson said in an emailed response.

The sum grew over the years as NSEL went on filling in payout defaults by one party by using cash generated by others.

The liability of members who had already defaulted also went on increasing.

In his affidavit confessing his role in the scam, Anjani Sinha, former MD & CEO of NSEL, estimates “rolling over costs” to be Rs 1,200 crore (Rs 12 billion).

He also gives a member-wise break up of these costs.

According to Sinha, “It is a fact that these buyers have used part of these funds towards repayment of their interest component and other exchange charges.

"Besides, members have also used this fund for giving it back to the exchange as cash-margin deposit. Considering all these factors, the cost of funds comes to 21-22 per cent a year.

"So, the total amount payable by the members as on date includes the principal amount utilised by them, plus the cost of funds paid by them through rolling over of their liability by way of compounding.”

He goes on to add: “The situation was such that if we did not allow rollovers, buyers would have defaulted on huge amounts.

"On the other hand, if we continue to allow a member to roll over his position position, his exposure keeps on increasing every year by 20-25 per cent due to the impact of rollover cost and exchange fees.”

How it unfolded
N Sundaresha Subramanian in New Delhi
Source: