Billionaire Mukesh Ambani's Reliance Industries has announced the contours of carving out of its oil-to-chemicals (O2C) business into an independent unit with a USD 25 billion loan from the parent, as it looks to unlock value by selling stakes to global investors like Saudi Aramco. 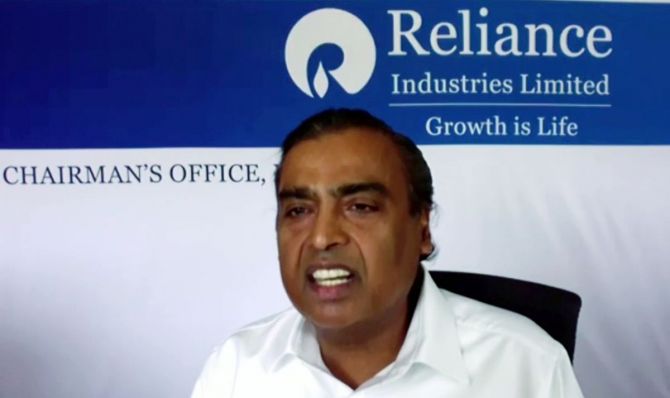 The reorganisation will enable the focused pursuit of opportunities across the O2C value chain, improve efficiencies through self-sustaining capital structure and a dedicated management team, and attract dedicated pools of investor capital, according to a company presentation filed with the stock exchanges.

The O2C business unit holds Reliance's oil refinery and petrochemical assets and retail fuel business but not upstream oil and gas producing fields such as KG-D6 and textiles business.

Once completed, Reliance Industries Ltd (RIL) -- the company founded by Dhirubhai Ambani in the late 1960s -- will house only the upstream oil and gas exploration and production business, including the KG-D6 block, financial services, group treasury and the legacy textile businesses, and act as a holding company of the group.

The retail business is held in Reliance Retail Ventures Ltd and telecom and digital ventures are nested in Jio Platforms Ltd.

RIL holds 85.1 per cent of Reliance Retail and 67.3 per cent of Jio Platforms. The rest it had sold to global investors including Facebook Inc and Google for over Rs 2 lakh crore.

The wholly-owned O2C unit's assets will be funded by the interest-bearing loan, which will be an "efficient mechanism to upstream cash, including any potential capital receipts," in the unit, the firm said.

RIL will provide a loan of USD 25 billion to the O2C subsidiary at floating interest rate with the subsidiary having about USD 42 billion of assets (28 per cent of consolidated assets).

RIL is giving a USD 25 billion, 10-year loan to this newly created arm for buying the assets of the O2C businesses. Even though the O2C assets will move into a new arm, its debt will continue to sit inside RIL.

In August 2019, RIL had agreed to upstream Rs 1.08 lakh crore of Jio's debt to make its telecom venture debt-free, ahead of inducting strategic and financial investors like Facebook, Google and KKR.

RIL started work on hiving off the O2C business into a separate unit last year for a possible stake sale to companies such as Saudi Aramco.

It values the O2C business at USD 75 billion and has been in talks with Saudi Arabian Oil Co (Aramco) for sale of a 20 per cent interest.

"Reorganisation of O2C business facilitates participation by strategic investors and marquee sector-focused investors," the firm said adding it would have no impact on RIL's consolidated financials as well as investment-grade international and domestic credit ratings.

The company is expected to get the necessary approvals for the spin-off by the second quarter of the next fiscal year.

"Until the stake sale is completed, there will be no subordination risk for RIL's lenders, as the company will continue to have full access to the O2C business' cash flows, given its full ownership of and no external debt at the new subsidiary," Patodia said.

RIL also announced its aim to work with the O2C business to reduce its carbon footprint and become "net carbon zero" by 2035.

Its vision includes investing in developing renewable energy systems to meet energy demand and to speed up the transition from traditional carbon-based fuels to hydrogen.

It also houses Reliance Ethane Pipeline Limited that operates a pipeline between Dahej in Gujarat and Nagothane in Maharashtra as well as a 74.9 per cent stake that Reliance holds in the joint venture with Sibur.

It's very large ethane carriers, gas pipelines such as one that transports coal-bed methane from its CBM blocks, overseas oil and gas asset holding company Reliance Industries (Middle East) DMCC, and domestic exploration and production assets would not form part of the O2C unit.

Also, RIL's textiles business as operated out of the Naroda site, Baroda township and land, including cricket stadium, Jamnagar power assets, and Sikka Ports and Terminals Limited would also not be part of the O2C unit.

RIL owns and operates twin oil refineries at Jamnagar in Gujarat, with a combined capacity of 68.2 million tonnes per annum.

The company holds a 66.6 per cent stake in the KG-D6 block where it is investing about USD 5 billion in developing a second set of gas discoveries along with BP.

It also has a similar stake in the NEC-25 block in the Bay of Bengal and operates two CBM blocks in Madhya Pradesh. These upstream assets are not part of the O2C unit.