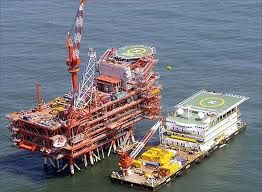 The Oil Ministry has sought legal opinion to ascertain if British energy giant BP and Canada's Niko are part of the arbitration initiated by their partner Reliance Industries against the government levying penalties for KG-D6 gas production falling short of target.

The near-doubling of gas prices to $8 per million British thermal units that will kick in from next month will accrue to all producers in the country.

However, in the case of the main fields in the KG-D6 block, it would be conditional upon RIL furnishing a bank guarantee equivalent to the incremental revenue it will get from the new rates.

If it is proved that the company deliberately produced less gas from the D1&D3 fields in KG-D6, the bank guarantee will be encashed, depriving RIL of the incremental revenue.

Sources said while RIL agreed to the condition, the exploration division of the Oil Ministry raised issues about BP and Niko Resources, which together hold 40 per cent in the KG-D6 block.

It felt since the Cabinet stipulation was for the contractor that had initiated arbitration, a bank guarantee cannot be taken from BP and Niko, which were not part of the 2012

arbitration notice slapped on the government.

To break the impasse, BP and Niko separately wrote to the ministry, saying that RIL, in filing the arbitration notice, had acted as an operator representing the interests of all the KG-D6 constituents and they were part of the arbitration.

BP and Niko further stated that as a contractor to the production sharing contract they are party to the arbitration and RIL has represented them as per the PSC and JOA, sources said.

Sources said the ministry has now sought legal opinion to ascertain if BP and Niko can become part of the arbitration with such letters.

RIL and BP say the decline in current D1&D3 output to a 10th of the previously projected 80 million standard cubic meters per day was purely because of unanticipated geological complexities such as a drop in reservoir pressure and ingress of water and sand.

RIL had dragged the ministry to arbitration last year, saying the contract does not provide for levy of a $1.8 billion penalty for output not being in line with projected production profile.

Also, BP and Niko had previously submitted that the decision of the tribunal on the gas output issue would be binding on both of them.
© Copyright 2021 PTI. All rights reserved. Republication or redistribution of PTI content, including by framing or similar means, is expressly prohibited without the prior written consent.