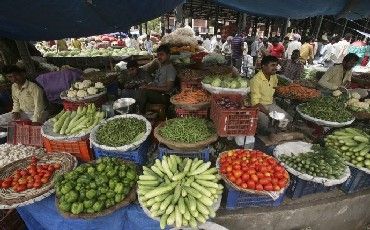 The Reserve Bank on Tuesday sounded optimistic about meeting the 6 per cent retail inflation target for January next year but sounded cautious about the new GDP forecast, projecting 7.8 per cent growth for the current fiscal.

"CPI inflation will remain below the target of 6 per cent set for January 2016, hovering around 5 per cent in the first half of 2015-16, and a little above 5.5 per cent in the second half," RBI Governor Raghuram Rajan said in first bi-monthly monetary policy statement for 2015-16.

The Reserve Bank has projected GDP growth rate for the current fiscal at 7.8 per cent. The projection is lower than the government's estimate of 8-8.5 per cent expansion in GDP in 2015-16.

On the adverse impact of unseasonal rains and hailstorms in March, RBI said it is still unfolding.

"Initial estimates indicate that as much as 17 per cent of the sown area under the rabi crop may have been affected though the precise extent of the damage remains to be determined," it said.

RBI expects to meet the inflation target due to a broad-based and steady decline in retail inflation since September 2014, plans announced in the Budget to step up infrastructure spending, depressed commodity prices and upbeat financial market conditions.

However, the risks include a persisting slackness in the economy, depressed input costs, any disruptive spike in global commodity prices, especially crude, and a deficient monsoon.

On the new monetary policy committee, the report said that the commitment of the government to this framework enhances credibility significantly since it indicates that government will do its part on fiscal side and on supply constraints to reduce burden on monetary policy in achieving price stability.

The government and the RBI had singed a formal agreement in February on the new monetary policy committee.

On growth, the report said recent upgrades to the national accounts by the CSO indicate a rebound in economic activity from the second half of FY15.

"Domestic economic activity firmed up in FY15, spurred by a pick-up in manufacturing and services. Little definitive evidence, however, is available on a clear 'break-out' of economic activity.

"Key macroeconomic indicators, leading and coincident, point to the presence of considerable slack in the economy," the report underlined.

RBI also said that the growth in allied activities related to agriculture is likely to remain strong as in the recent past, though it remains to be seen whether it will fully compensate the decline in foodgrains output.