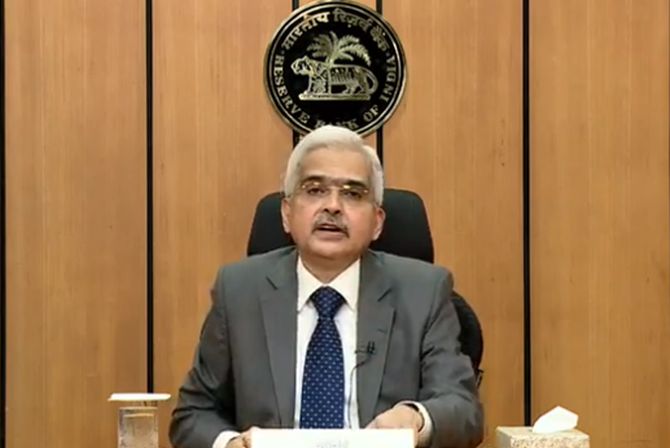 The Reserve Bank on Friday unexpectedly slashed benchmark interest rates to their lowest levels since 2000 and extended the moratorium on repayment of loans for three months to ramp up support for the economy which is likely to contract for the first time in over four decades.

The central bank, which advanced the monetary policy committee (MPC) meeting for the second time since March, extended the three-month moratorium of loan repayments, from June 1 to August 31 and raised the limit on banks' group exposure to companies.

It also increased credit for pre and post-shipment of exports from 1 year to 15 months and gave additional three months to foreign portfolio investors to meet investment needs.

The benchmark repurchase (repo) rate was cut by 40 basis points to 4 per cent, the lowest since the benchmark came into being in 2000, Governor Shaktikanta Das said.

Consequently, the reverse repo rate was cut to 3.35 per cent from 3.75 per cent.

The benchmark rates decide the interest on home, auto and other loans.

They also dictate interest rates on savings deposits, which are likely to fall in tandem.

In its first official forecast for economic growth, the central bank said the gross domestic product (GDP) is likely to contract in FY21 (April 2020 to March 2021) as a direct fallout of the outbreak of coronavirus and ensuing lockdown.

Even before the coronavirus outbreak, the Indian economy was experiencing a slowdown, with GDP growth declining to a projected 4.9 per cent in 2019-20 fiscal, its slowest pace in the last decade.

"The macroeconomic impact of the pandemic is turning out to be more severe than initially anticipated, and various sectors of the economy are experiencing acute stress," RBI said adding that beyond the destruction of economic and financial activity, livelihood and health are severely affected.

Das said the combined impact of demand compression and supply disruptions will depress economic activity in the first half of the year, with some pick-up in growth impulses being seen in H2 2021 onwards.

India has been under lockdown since March 25 to contain the spread of the virus, resulting in supply disruptions and demand compression.

Das said domestic economic activity has been impacted severely by the lockdown that has been extended till May 31.

"High-frequency indicators point to a collapse in demand beginning March 2020 across both urban and rural segments," he said.

Supplementing government's COVID-19 stimulus that mostly comprised of credit lines to small business and farmers, RBI said it will facilitate the flow of funds at affordable rates and revive animal spirits.

"The RBI will continue to remain vigilant and in battle readiness to use all its instruments and even fashion new ones, as the recent experience has demonstrated, to address the dynamics of the unknown future.

"The goals, as I have enunciated earlier, are to keep the financial system and financial markets sound, liquid and smoothly functioning; to ensure access to finance to all, especially those that tend to get excluded by financial markets; and to preserve financial stability," Das said.

The RBI will continue to remain vigilant and in battle readiness to use all its instruments and even fashion new ones, as recent experience has demonstrated, to address dynamics of the unknown future, he stated.

Five of the six-member monetary policy committee (MPC) including Das voted for a 40 bps reduction in policy repo rate, while Chetan Ghate voted for a reduction by 25 bps.

The RBI supplemented the interest rate cut by extending till August the permission to all banks to give a three-month moratorium on payment of monthly instalments on all outstanding loans, providing relief to home and auto buyers as well as real estate sector where construction activities are at a standstill.

The moratorium on interest on working capital was also extended by three months.

Also, interest accumulated for the six-month moratorium period can be converted into a term loan, Das said adding the rescheduling of payments on account of the moratorium/deferment will not qualify as default.

Further, bank exposure to corporates has been raised to 30 per cent of the group's eligible capital base from the current limit of 25 per cent, a move that will provide headroom for additional credit required by large corporates.

Das said the inflation outlook is highly uncertain due to the outbreak of the COVID-19 pandemic and expressed concern over elevated prices of pulses.

He also said there is a need to review import duties to moderate prices.

Headline inflation may remain firm in the first half of the year and may ease in the second half. Inflation may fall below 4 per cent in the third or fourth quarter of the current fiscal, according to the Governor.

"If the inflation trajectory evolves as expected, more space will open up to address the risks to growth," he said.

"After extensive discussions, the MPC voted unanimously for a reduction in policy repo rate and for maintaining the accommodative stance of the monetary policy as long as necessary to revive growth and to mitigate the impact of COVID-19 while ensuring that inflation remains within the target," Das said.