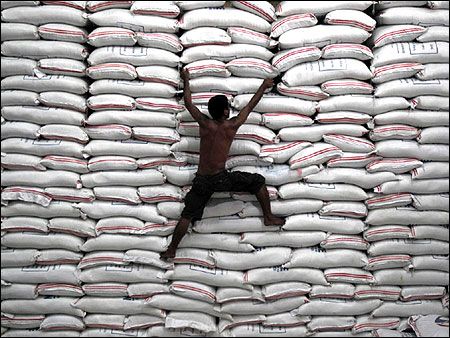 The Reserve Bank on Thursday projected retail inflation to increase to 5 per cent in the second half of the current fiscal citing risks of El Nino impacting the monsoon and one-off effects of the Goods and Services Tax.

Risks are evenly balanced around the inflation trajectory at the current juncture and there are upside risks to the baseline projection, it said.

"The main one stems from the uncertainty surrounding the outcome of the south west monsoon in view of the rising probability of an El Niño event around July-August, and its implications for food inflation," RBI said, as it kept the status quo on key interest rate for the third time in a row.

A proactive supply management will play a critical role in staving off pressures on headline inflation, it added.

RBI further said that a prominent risk could emanate from managing the implementation of the allowances recommended by the 7th Central Pay Commission (CPC).

"In case the increase in house rent allowance as recommended by the 7th CPC is awarded, it will push up the baseline trajectory by an estimated 100-150 basis points over a period of 12-18 months, with this initial statistical impact on the CPI followed up by second order effects," it said.

Also, upside risk arises from the one-off effects of the GST, said the policy statement. The new indirect tax regime is likely to be implemented from July 1.

On the downside, RBI said international crude prices have been easing recently and their pass-through to domestic prices of petroleum products should alleviate pressure on headline inflation.

Also, stepped-up procurement operations in the wake of the record production of foodgrains will rebuild buffer stocks and mitigate food price stress, if it materialises.

After moderating continuously over the last six months to a historic low, retail inflation measured by year-on-year changes in the Consumer Price Index (CPI) turned upwards in February to 3.7 per cent. While food prices bottomed out at the preceding month’s level, base effects pushed up inflation in this category.