A reception often reserved for rockstars came the way of mining mogul Anil Agarwal when he started revealing nuggets of his ascent from a scrap-metal dealer to one of India's most prominent self-made industrialists on social media. 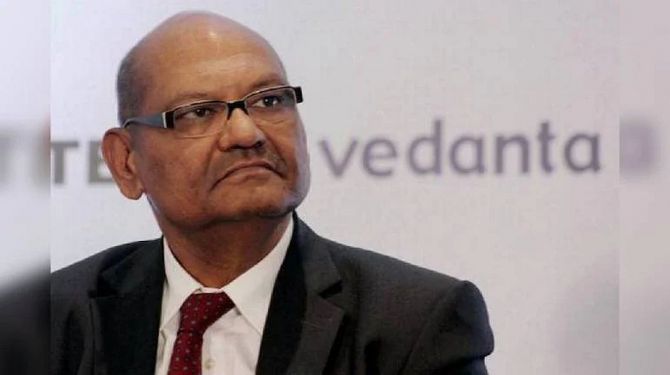 And now he has been flooded with booking writing proposals and has even been offered money for a biopic.

In February this year, Agarwal, 68, started tweeting his journey from Bihar to Mumbai first and then to London to head a globally diversified natural resources company with interests in zinc-lead-silver, iron ore, steel, copper, aluminium, power, oil and gas.

"But the response I have got (to the tweets about my journey) is overwhelming. There have been two million responses to a single tweet. I myself have been surprised," he told PTI in an interview.

Vedanta chairman Anil Agarwal was born in the lower-middle-class Marwari family on January 24, 1954, in Patna, Bihar.

He quit studies at the age of 15 to join his father's business and at 19 went to Mumbai "with only a tiffin box, bedding, and dreams in my eyes."

"When I write my story, I always keep it in mind that I am not glorifying myself.

"I am only saying please do not be afraid of failure. Never think or dream small. If I can do it, so can you. You are more capable than me. This is my message," he said.

While the social media posts have been a hit, Agarwal says publishers have been constantly chasing his people for book rights.

Film offers too have come his way.

"There is not a film company that has approached. All big producers have approached. They want to give me money (for making a biopic)," he said without disclosing any names.

He says he hasn't made up his mind and a decision will be driven by the opinion of his close associates and daughter Priya.

"I am not a rockstar. I hail from Patna and I am proud of my roots," he said.

"I have been told that I should not mention that I come from Patna as it will spoil my name. And I have told them that I wont stop. That is my roots."

The statement is typical of the mining mogul's blunt style, honed during a remarkable three-decade rise.

Characterised by rapid growth and bold dealmaking, the ascent has been remarkable.

In 1976, he founded Sterlite Industries as copper maker and a decade later diversified into production of copper cables for telecom companies.

He hit the headlines when in 2001, his company bought a majority stake in government-owned aluminium maker Balco.

In October 2018, Agarwal took Vedanta private after paying more than $1 billion for the one-third of the metals firm that he didn't already own.

His listed Sterlite Technologies has hived off its power transmission business into a separate unit and listed an infrastructure investment trust.

Agarwal, who owns a majority stake in India-listed Vedanta Ltd, has created a $10 billion fund in partnership with London firm Centricus to invest in public sector companies that are being privatised.

In the tweets spread over weeks, he talked about the beginning of his great ambition, his toughest years of life, his struggles with depression, and the time when his fate finally changed forever. From his first firm, 'Shamsher Sterling Cable Company' to becoming the father of a multinational mining company, Anil Agarwal did not have it the easy way.

He said, "I bought my first company with great ambition, but the next 10 years were the toughest years of my life."

"In 1976, I acquired Shamsher Sterling Cable Company but I had no money to pay the salary of my employees or buy the raw materials needed.

"I spent my days visiting banks to clear my payments, and my nights reviving the closed cable plant," Agarwal wrote.

To make ends meet, Agarwal said he started nine businesses in various fields: magnetic wires, different cables, aluminum rods, multiplexes with Warner Brothers - "but all of them failed, one after the other. Still, I never gave up."

He adds, "As much as I did not want to admit it, the stress of the financial crisis pulled me to my lowest.

"For three years, I slipped into depression and no one knew about it. I was determined to get my life back on track so I exercised and meditated as much as I could..."

However, today, things are different for Agarwal. He says, "In order to succeed, you must first learn to fail.."

Like all industrialists, he has critics too. Some analysts and fund managers privately say his heavily-indebted creation remains opaque and unwieldy.

An industry-wide mining ban in Goa crippled the group's iron ore division, lengthy legal disputes with local tribals had led to mothballing of Lanjigarh aluminium facility in Orissa and its copper unit in Tamil Nadu was forced to cease operations following a major protest in 2018 over alleged pollution.

Unfazed by setbacks, Agarwal says he wants Vedanta to grow at 20-30 per cent annually and create thousands of jobs, empowering the local population.

"Of course profit is at the centre but our goal is to see India become a developed country," he says.

Agarwal, who in the past has spoken of plans to step back from running Vedanta, says he is "not in a hurry" to frame a formal succession plan.

The firm's ownership is in a holding company and it is run by professional management.

"People give charge of their empires to sons/daughters even if they are capable or not.

"That is not our mindset. We will do what is the best in the interest of the company," he said without elaborating.

Ammar Zaidi
© Copyright 2022 PTI. All rights reserved. Republication or redistribution of PTI content, including by framing or similar means, is expressly prohibited without the prior written consent.