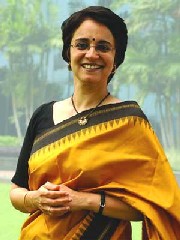 The management graduate from IIM-Ahmedabad has been with ICICI group for over 15 years. She is likely to be replaced by Anup Bagchi, executive director at ICICI Securities, sources said. Both Buch and Bagchi are also ICICI Securities board members.

In response to an e-mail query on the subject, an ICICI Bank spokesperson said news of Buch's exit were untrue.

Queries sent to an ICICI Securities spokesperson and marked to Buch remained unanswered. Buch did not reply to a text query.

As head of ICICI Securities, Buch is responsible for the firm's corporate finance activities, which include equity capital markets advisory services and institutional and retail stock broking.

She took on her present role in February 2009 after the retirement of S Mukherji.

Prior to her present assignment, Buch was an executive director on the board of ICICI Bank, the country's biggest private sector lender. She was responsible for the global markets business covering treasury solutions for clients, including foreign exchange, fixed income and derivatives.

In addition, she was head of the bank's global operations, covering transaction processing and mid-office control for retail, corporate, international and rural banking. She was also the chief brand officer for the ICICI group.

Bagchi, who has been with the ICICI group for over 17 years, is in charge of the retail broking business, distribution of retail financial products and wealth management services. ICICI Direct, the online broking arm of ICICI Securities, has over 2 million customers.

This will be the fourth senior-level exit from the ICICI group in less than two years.

In April 2009, Shikha Sharma, who was MD & CEO of ICICI Prudential Life Insurance, quit to become the MD & CEO of Axis Bank.