The banks have asked the court to demand his return and  impound his passport. 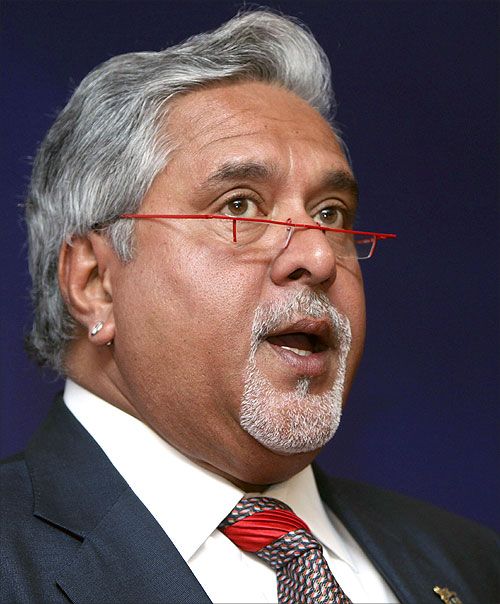 Image: Mallya, who had billed himself as the "King of Good Times" is now a 'wilful' defaulter. Photograph: Reuters

A group of Indian banks, seeking to recover more than $1 billion in loans from Kingfisher Airlines, has taken possession of nine trademarks related to the defunct carrier as the mystery over the whereabouts of its chief, Vijay Mallya, deepens.

Mallya, who built his fortune with Kingfisher Beer and is a guarantor to the debt, left the country last week, a lawyer for the lenders told the Indian Supreme Court on Wednesday.

The banks have asked the court to demand his return and impound his passport.

The latest twist in Mallya's fortunes has come at a time when authorities have pledged to clean up bank balance sheets, with the industry saddled by an estimated $120 billion in bad and troubled loans.

Finance Minister Arun Jaitley told parliament on Thursday that the lenders will take every possible action to recover the debt from Mallya and other defaulters.

"As far as the government is concerned the clear instructions are that the banks must go all out to take every possible action," he said, adding there were some cases of "wilful default even bordering (on) fraud".

Indian media believe Mallya is in Britain and have reported from the gates of a luxury residence in Hertfordshire, to the north of London, that he may be staying there.

A spokesman for UB Group, Mallya's conglomerate, declined to comment on his whereabouts and the trademark seizure.

Mallya, who had billed himself as the "King of Good Times" living an extravagant life, has been called a 'wilful' defaulter by some banks.

He said over the weekend that the he had no intention of running away from creditors to Kingfisher, and was in talks with them over a one-time settlement.

The trademarks seized include the "Kingfisher" label, "Flying Models" and "Fly the Good Times", according to a notice in newspapers by the banks' trustee, SBICAP Trustee Co Ltd.

Harish Bijoor, a brand consultant, however, called the banks' move a knee-jerk reaction and said there might not be many takers for the trademarks.

"Who would ever want to run with a label called Kingfisher Airlines?," Bijoor said, adding he did not expect the move to impact India's best-selling beer, Kingfisher.

Kingfisher beer is made by United Breweries Ltd which is part of Mallya's UB Group but now counts Heineken as its biggest shareholder.