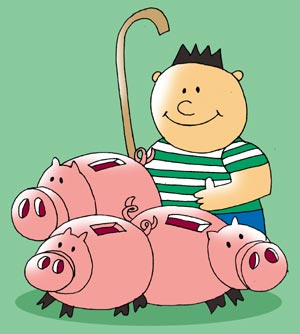 Until recently, debt market experts were of the view that interest rates had nearly bottomed out.

But after the recent demonetisation, they believe that there may be scope for another 50 basis points of rate cuts. This calls for some tweaking of your fixed-income strategy.

Softening of interest rates is expected over the next six months. Says Lakshmi Iyer, chief investment officer (debt) and head of products, Kotak Mutual Fund: "I expect a 25-basis point repo rate cut between now and February and a second rate cut of the same magnitude within the first two quarters of the next fiscal year."

Demonetisation is expected to impact interest rates in three ways.

One, as money flows back to banks, their deposits are expected to rise sharply.

There will be less incentive for banks to issue certificates of deposits in the money market or offer higher rates on short-term deposits.

Government finances are expected to be impacted, first, through the taxation channel.

If more money is declared, the government's tax collection will improve, though this may, to some extent, be offset by lower indirect tax collection, as transaction volumes decline.

Altogether, however, its tax balance should improve.

The second channel is that at some juncture the RBI will retire the outstanding notes, once all the windows for returning currencies expire.

It will then receive a windfall which will become available to the government either directly or indirectly.

The RBI could fund bank capitalisation, or it could transfer the surplus to the government, enabling the latter to meet its fiscal deficit target.

The third impact will be on inflation.

As real estate prices fall, there will be repercussions on wages and also on ancillary industries upstream and downstream. Discretionary consumption could also take a knock.

"Inflation is expected to soften and growth could also be lower for a quarter or two, making the central bank more amenable to rate cuts," says Suyash Choudhary, head-fixed income, IDFC AMC. All these three developments will enable rates to soften.

Since the US elections, however, there has been upward pressure on emerging as well as developed market yields on the expectation that there may be more fiscal spending and tax cuts in the US, leading to pressure on yields.

"The interplay between global and local factors will decide the scope of rate cuts in India. All said, however, one can expect another 50 basis points of cuts," says Choudhary.

"We are advising investors to have an equal allocation to dynamic bond funds on the one hand and accrual-type funds (short and medium term) on the other," says Vishal Dhawan, chief financial planner, Plan Ahead Wealth Advisors.

For investors in the highest tax bracket, tax-free bonds, which can be purchased from the secondary markets for a yield to maturity of around 6.25 per cent, remain attractive.

If rates fall, investors holding them for the short term could get the benefit of capital appreciation.

Senior Citizens Savings Scheme (SCSS), with a return of 8.5 per cent, and Sukanya Samriddhi Yojana (also 8.5 per cent) both continue to look attractive. These two are better suited for investors in the lower tax brackets.

"As for fixed and corporate deposits, people who want to earn regular income from interest and are in the lower tax bracket, should lock into current rates by investing in longer-duration deposits of three years plus," says Dhawan.