Gujarat has the maximum number of cleanest railway stations in India, according to a survey by IRCTC. 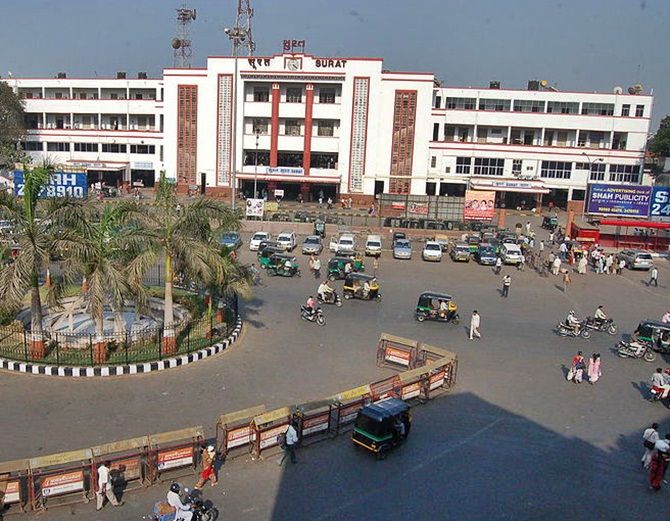 Surat and Rajkot in Gujarat are among the cleanest train stations in India while Mughalsarai in Uttar Pradesh and Pune are among the dirtiest, a survey has found.

The station at Bilaspur in Chhattisgarh was third among the 75 A1-category railway stations followed by Solapur and Mumbai Central in Maharashtra, Chandigarh, Bhubaneshwar (Odisha) and Vadodara (Gujarat), said the preliminary report of the survey, which was released by Railway Minister Suresh Prabu on Thursday.

"The idea is to make the entire rail network clean. This is just the beginning of a process which will actually and eventually bring all stations on a par to a particular standard," Prabhu said.

He said the move is in line with the budget announcement of taking steps to improve the cleanliness at the 8,000 stations in India and take forward the 'Swachh Rail Swachh Bharat' mission.

Shahganj, Ballia and Janghai (Uttar Pradesh), Madhubani and Bakhtiyarpur (Bihar) and Raichur (Karnataka) were among the 10 least clean stations.

Rail Ministry had entrusted the task of the survey to Indian Railway Catering and Tourism Corporation (IRCTC), which engaged TNS India Pvt Ltd for undertaking the work.

As many as 75 A1 and 332 A category stations across 16 zonal railways were covered by the survey, which was based on passenger feedback.

The survey was conducted through interviews with passengers who were asked to rate the cleanliness of stations on 40 different parameters.

The final report, which will also factor in the existing infrastructure, responses from railway staff and non-railway service providers, is expected to be submitted to the Rail Ministry shortly, an official said.

After the scrutiny of the final report, the ministry will take further action for improving the cleanliness standards at major stations, he added.

Please take the poll below and let us know your views.

Do you agree with the survey results? Which stations do you think are the cleanest in India? Share your views in the message board.