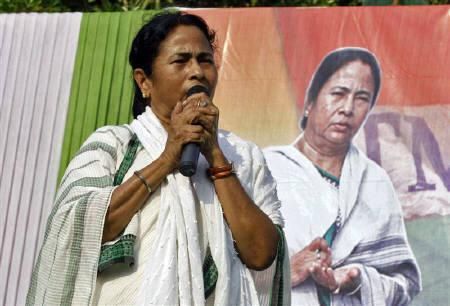 Prime Minister Narendra Modi today assured West Bengal Chief Minister Mamata Banerjee that the Centre will leave no stone unturned in aiding the development of the state, but is understood to have been non-committal on her request for a debt waiver from the Centre.

Banerjee's first meeting with Modi after he became Prime Minister comes against the backdrop of acrimony between her party Trinamool Congress and BJP.

Seeking a special financial package for her debt-ridden state, Banerjee initially met Modi in Parliament House before calling on him again with a delegation of MPs from her party.

The West Bengal Chief Minister -- who voiced concern over the funds pending for schemes like MNREGA and ICDS -- said that Modi praised the state's financial performance in raising the revenue and assured help in maintaining fiscal discipline.

"The PM said that Bengal's loan was maximum in comparison to other states. But he appreciated our efforts in keeping the financial discipline... He also praised our efforts and hoped that financial situation will improve further. "

He (PM) said we will try (to help) because the country is also facing a crisis on financial front. 'We will try to see how we can help the state' he said," Mamata told reporters.

However, according to a TMC MP who was part of the delegation, the Prime Minister was non-committal on the debt waiver issue. At the meeting, Banerjee raised the debt problem, which she has said was mostly a result of the actions of the previous Left government.

"Today, all our party MPs met PM and before that I also met him. We apprised him of Bengal's financial situation. We came to power in 2011 and the loan was taken before that.

"The loan was about Rs 1 lakh crore from RBI. It was not our fault. The loan was not taken by us but by the previous Left government," she said.

"The Centre takes away all the money, so how will the state develop and how will the poor benefit? Road (building) work, food procurement, 100-day minimum work... how will it will?

Banerjee said. "We have sought waiver of the loan for carrying out development work," the chief minister said.