Davos' biggest claim to fame for the past four decades has been World Economic Forum's Annual Meeting every January. 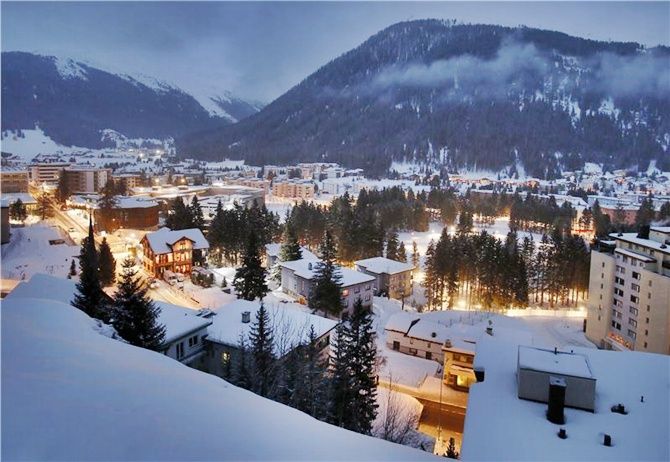 In a sea-change at the highest town of Europe, black business suits and orange-and-blue army dress have now become a common sight in Davos, as the world of business takes over this Alpine resort for the next five days beginning today, from the usual skiing enthusiasts.

Still, Davos is not devoid of winter-sport fans and tourists can be seen devouring the rich history of this small Swiss town on snow-capped Alps.

Once famous for being a summer health resort, Davos has gradually emerged as a major winter sport hub on Alps, but its biggest claim to fame for the past four decades has been World Economic Forum's Annual Meeting every January, beginning 1971.

The Geneva-based WEF would host its 45th Annual Meeting here beginning today, wherein more than 2,500 leaders from across the world including 40 heads of government are expected to indulge in a high-profile talk fest for five days. To cover this global elite jamboree, there are over 500 journalists as well.

While such a high-profile event leads to all hotels and rental apartments being occupied, the die-hard winter sport fans still throng this place as WEF also means relatively smaller crowds in ski areas and on mountain cableways. 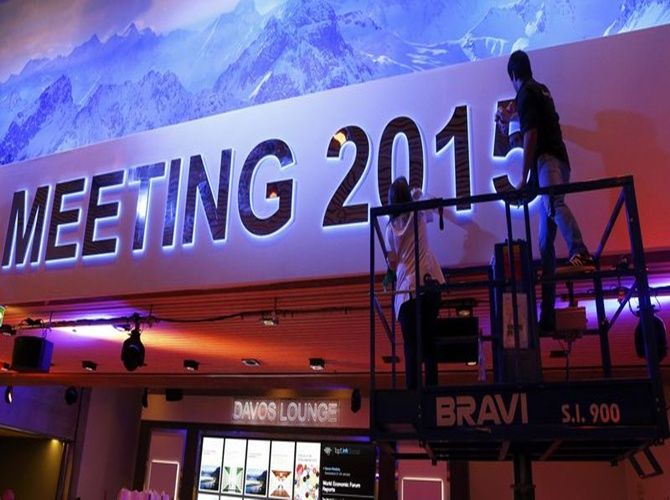 Image: A worker prepares the sign at the entrance hall of the congress centre, the venue of the World Economic Forum . Photograph: Pascal Lauener/Reuters

The only drawback for tourists is that they cannot stay within the town, which has less than 10 medium-sized hotels and about 40 small ones including in near-by areas like Klosters and Dorf.

Besides, the so-called WAGs (wives and girlfriends of those attending WEF meet) are also around in large numbers on ski circuits and at various tourist destinations of the town that comprises two big parallel roads and numerous connecting alleys.

Davos' history as a modern and popular holiday destination dates back to 150 years ago in 1865 when first winter guests arrived here. Till then, it was just a summer mountain health resort with a strong reputation for treatment of tuberculosis patients.

One day in February 1865, Doctor Friedrich Unger and Hugo Richter from Germany arrived here and began a course of treatment on a bed made from a hay sled covered with boards.

The treatment rapidly proved successful and both men were able to return to work. Soon after, Doctor Friedrich Unger returned to Davos and worked as a doctor here for over 20 years. Hugo Richter married a Davos girl and took over the management of a guest house here. 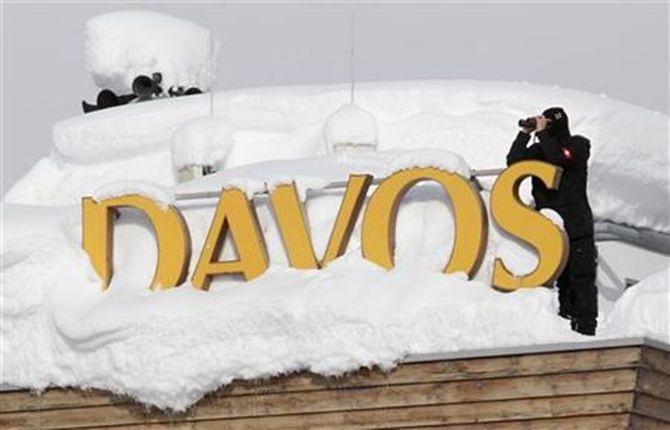 Image: A member of Swiss special police forces observes from the roof of a hotel covered in snow in Davos Photograph: Christian Hartmann/Reuters

Another feather in its cap is Davos being home to Ernst Ludwig Kirchner, who spent his last 20 years in this town, which is full of many of his finest paintings. Besides a museum devoted to Kirchner's work, his paintings can be seen anywhere and everywhere in Davos.

Towards the end of his life, Kirchner suffered a major nervous breakdown and spent his last days in a sanatorium in Davos. This is the same sanatorium that inspired Noble laureate Thomas Mann's classic novel 'The Magic Mountain'.

Davos' annual affair with WEF began in 1971 when the Forum was known as European Management Forum and that year WEF founder Klaus Schwab invited over 400 European business leaders for a meeting at Davos Congress Centre under the patronage of European Commission.

Subsequently, WEF was formed and leaders from across the world began congregating in Davos at the end of January every year.

Over the years, WEF Annual Meeting in Davos grew larger and larger and has been host to many historic accords and meetings, including one draft agreement on Gaza and Jericho between the then Israel Foreign Minister Shimon Peres and Palestine Liberation Organisation Chairman Yasser Arafat in 1994. 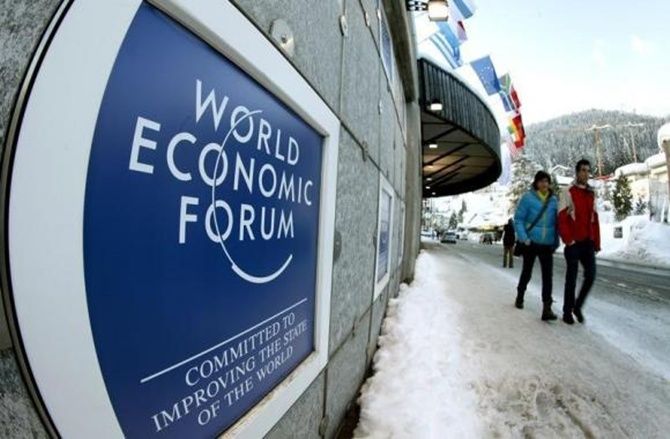 Image: People walk past the logo of the World Economic Forum (WEF) in front of the congress center in the Swiss mountain resort of Davos. Photograph: Arnd Wiegmann/Reuters

Incidentally, 90-year-old Peres would be the oldest participant at this year's annual meeting from January 21-25.

In 1988, Greece and Turkey also signed their "Davos Declaration" here, which saw the two countries avoid a war, while North and South Korea held their first ministerial level meetings in Davos in 1989 -- a year that also saw German chancellor Helmut Kohl here discussing German reunification and then the knocking down of Berlin Wall.

In the past 45 years, only once WEF has held its Annual Meeting outside Davos when in 2002 it decided to shift the venue to New York to show solidarity with that city and the American public after the 9/11 terrorist attacks in the US.

Over the years, India's presence has also been increasing at the Davos meeting, during which hundreds of Indians can be seen strolling on its narrow roads, one of which have hosted an 'India Adda' for many years.

This year, however, it is time for Make in India pavilion to showcase the flagship programme of Prime Minister Narendra Modi.

Barun Jha in Davos
© Copyright 2021 PTI. All rights reserved. Republication or redistribution of PTI content, including by framing or similar means, is expressly prohibited without the prior written consent.