Should you rush to buy oil & gas, real estate stocks?

Though the developments are positive, analysts say the benefits will accrue only in the long run The government also introduced the Real Estate (Regulation and Development) Bill, 2015 in Parliament. Experts suggest that the proposed regulator under the Act is expected to ensure timely delivery of projects, which if successful, will significantly improve the confidence of buyers and funding agencies in builders. 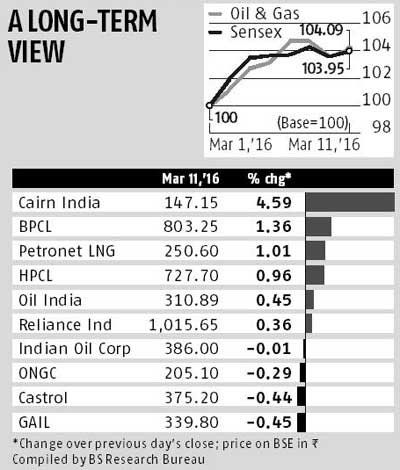 "In long run, it may help revive the weak sales and reduction in funding cost for the developers. On the other hand, the developers would need to focus on augmenting their project management skills and risk management frameworks to deliver on time," said Neeraj Bansal, Head of Real Estate and Construction Sector at KPMG in India.

While the Nifty 50 index has lost nearly 6 per cent in calendar year 2016 (CY16), the Nifty Energy index has dipped in line at around 6 per cent, though the Nifty Realty index has hugely underperformed by falling nearly 13 per cent during this period.

On Friday, the Nifty Energy and the Nifty Realty indices gained around 1 per cent each. Among individual stocks, RIL, ONGC, BPCL, HPCL, Cairn India and GAIL moved up 0.2 per cent - 1.3 per cent in the oil and gas pack. On the other hand, the realty space was a mixed bag with Prestige, DLF, Oberoi Realty, Godrej Properties, Sobha and HDIL moving up 0.5 per cent - 2.2 per cent, while Unitech and Phoenix slipped 0.2 per cent - 3 per cent.

Though the developments are positive, analysts say the benefits will accrue only in the long run - both for the real estate and the oil & gas sectors.

"We believe the measures could be NPV (net present value) positive in the long-run for ONGC and Reliance Industries (RIL), but the exact impact is difficult to gauge. Near term, there will not be any PAT benefit as projects take three - four years to commence production (after discovery). Progressively, we expect gradual re-rating of gas transmission companies like GAIL and GSPL in anticipation of their current sub-50 per cent utilisation getting enhanced," points out Jal Irani of Edelweiss Securities in a co-authored report with Yusufi Kapadia and Vivek Rajamani.

As regards the developments regarding the real estate sector, Sunil Jain, vice president - equity research at Nirmal Bang says that the move is a step in the right direction, he expects the measures to create negatively impact the companies in the short-run.

"Though the announcements are a step in the right direction, we are not positive on the real estate sector. In the short-term, the measures will have a negative impact on their balance sheets, as a lot of money will get blocked in the escrow account. As a result, there will be an increased requirement for funds. In a scenario when the real estate prices are not likely to move up, any the companies will have to absorb any increase in the cost of production of dwelling units. However in the long run, the sector will gain from the measures announced and will benefit the larger players that have a healthy balance sheet and a clean image," he says.

A K Prabhakar, head of research, IDBI Capital, too, believes that the Real Estate (Regulation and Development) Bill, 2015 will be a big positive for the consumers, but may not benefit the companies in the short-run. He suggests using the up move to reduce positions in the real estate stocks. However, in the oil & gas space, he holds a positive view on RIL and expects the stock to hit Rs 1,200 levels; and also maintains a 'hold' rating on ONGC.