Pay more for pre-packed atta, pulses, curd as 5% GST kicks in from today

A 5 per cent GST rate kicked in on Monday on pre-packed and labelled food items such as cereals, pulses and flour weighing less than 25 kg. 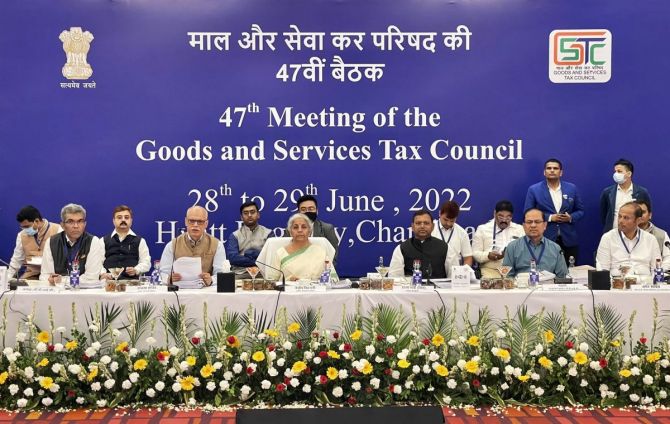 The Union finance ministry issued detailed frequently asked questions (FAQs) on the levy of Goods and Services Tax (GST) on food items ranging from cereals and pulses to curd and 'lassi'.

"GST would apply on such specified goods where the pre-packaged commodity is supplied in packages containing a quantity of less than or equal to 25 kilograms," it said.

For a commodity measured in litres like curd and 'lassi, the limit is 25 litres.

Prior to July 18, GST applied on specified goods when they were put up in a unit container and were bearing a registered brand name or were bearing the brand name.

"With effect from the 18th July 2022, this provision undergoes a change and GST has been made applicable on supply of such 'pre-packaged and labelled' commodities," it said.

For example, items like pulses, cereals like rice, wheat, and flour (atta) earlier attracted GST at the rate of 5 per cent when branded and packed. With effect from July 18, these items would attract GST when 'pre-packaged and labelled'.

Additionally, certain other items such as curd, 'lassi', and puffed rice when 'prepackaged and labelled' would attract GST at the rate of 5 per cent.

Pre-packaged commodity means a commodity which, without the purchaser being present, is placed in a package of whatever nature, whether sealed or not, so that the product contained therein has a pre-determined quantity.

The ministry said a single package of items like cereals, pulses and flour containing a quantity of more than 25 kg/25 litre would not fall in the category of a pre-packaged and labelled commodity for the purposes of GST and would therefore not attract GST.

"If several packages intended for retail sale to the ultimate consumer, say 10 packages of 10 kg each, are sold in a larger pack, then GST would apply to such supply," it said. "However, a package of say rice containing 50 kg (in one individual package) would not be considered a pre-packaged and labelled commodity for the purposes of GST levy."

FAQs clarified that only pre-packed items up to 25 kg will attract 5 per cent GST but if a retail shopkeeper supplies in loose quantity the item bought from a manufacturer or a distributor in a 25-kg pack, such sale to consumers will not attract GST.

Last week, the government had notified that from July 18, unbranded pre-packed and labelled food items would attract 5 per cent Goods and Services Tax. So far, only branded items used to attract the levy.

GST would apply when the pre-packaged and labelled package is sold by a distributor/manufacturer to a retailer purchasing food items in packages weighing up to 25 kg/25 litre.

"However, if for any reason, retailer supplies the item in loose quantity from such package, such supply by a retailer is not a supply of packaged commodity for the purpose of GST levy," the FAQs said.

"Some key clarification issued include that the terms pre-packed and labelled will be read in light of the Legal Metrology Act, and as such packages in excess of 25 kg, and supplies to industrial consumers will be exempt from GST levy," Jain added.

AMRG & Associates Senior Partner Rajat Mohan said this new levy is expected to fuel price inflation of basic consumable items of food like rice and cereals from today itself.

The GST Council, chaired by Union Finance Minister and comprising state FMs, had last month decided that pre-packed and labelled food items would attract 5 per cent GST from July 18.