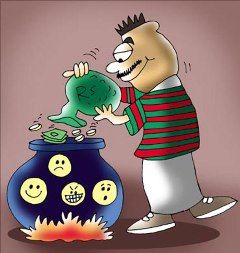 A day after the Pay Commission proposed 23.55 per cent rise in salaries and pensions of central government employees, the Finance Ministry on Friday expressed confidence that the fiscal deficit targets will not be breached because of absorbing the Rs 1.02 lakh crore bill.

Shaktikanta Das, Economic Affairs Secretary, said the submission of the 7th Pay Commission report was something which was known and the government knew it will take effect from January 1, 2016.

"So this was something which was expected. Now the content of the report obviously the government was not aware. But government always has broad estimation of what is going to be the impact of a new pay commission recommendation and accordingly internally a kind of risk matrix is prepared," he said.

Most of the expenditure because of implementation of the report would come in next financial year, 2016-17, he added.

"So, government will deal with the situation. We will work out our numbers," he told CNBC TV18. "So far as fiscal consolidation roadmap, fiscal roadmap is concerned, that will be maintained."

Das said the government had in the current financial year undertaken a slight expansion in fiscal deficit mainly for infrastructure projects.

"Next year we will work on our numbers as part of the budget. I am quite confident that the government will be able to maintain the fiscal deficit target for the next year," he said.

The government, he said, "will not like to have any fiscal slippages just because that has got several consequences which government is very much aware of".

Fitch Ratings said implementing the recommendations in toto could hurt the country's finances and will add to the challenges the government faces in achieving its fiscal consolidation target.

It said, "On its own, the pay rises would increase the central government's wage bill by around 0.5 per cent of GDP."

"As such, the planned wage increase is sufficient to add substantive challenges to achieving the planned medium-term consolidation targets," it said.

Citigroup said the target to bring down fiscal deficit to 3.5 per cent in 2016-17 is likely to become even more challenging after the rise in wage expenditure.

The brokerage sounded a warning that if the fiscal deficit target is achieved through a cut in public investments, it could offset the gains on economic activity somewhat.