When did Urjit Patel really resign?
When did Shaktikanta Das get the mandate to take over as RBI governor?
Nivedita Mookerji digs deep. 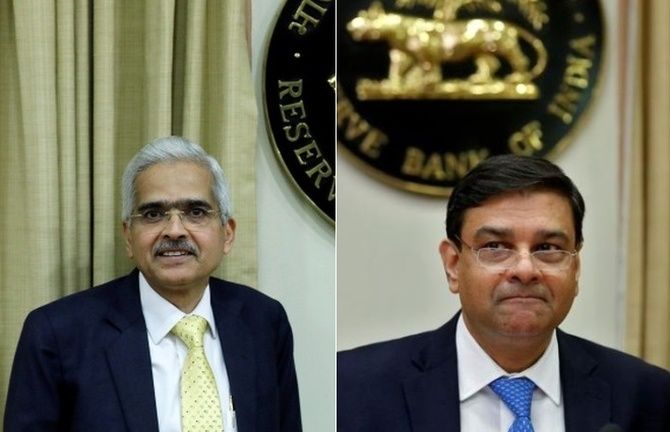 Did Urjit R Patel resign as Reserve Bank governor for personal reasons as he stated in his parting letter?

Did Dr Patel meet Prime Minister Narendra Damodardas Modi in the midst of a stormy relationship between the government and the RBI sometime in November?

Did he offer to resign during that meeting with the PM but was persuaded to keep things on hold?

Did Dr Patel keep the PM informed that he was going to step down as governor once the state elections were over or was it a sudden resignation?

If it was a sudden resignation, what was the latest trigger?

When did the government -- or rather the PM -- decide on former bureaucrat Shaktikanta Das as the one to replace Dr Patel at Mint Road?

And when did Das get to know that he would join the list of finance ministry bureaucrats being appointed as RBI governor?

These are some of the questions around the RBI-government tussle and the subsequent leadership change with no clear answers yet.

But like any other defining event, this one too has made each one of us a bit of a detective trying to find answers to some tricky questions and piece together a story that could be different from what we have perceived so far.

You could call it a fly on the wall account, gathered from people who might have been in the know.

Yes, of course, what could be more personal than feeling cornered in a tussle with the government, when all communication channels have broken down.

He went out in protest, and that was personal to him.

Then comes the question on Dr Patel's meeting with the PM. Did he or did he not?

The initial rush of response from the government was a denial, though off the record. Soon after, there was a caveat.

There was no recorded meeting between the PM and Dr Patel in November. There was silence on whether a confidential and 'unrecorded' meeting took place between DR Patel and the PM, prompting everyone to guess what the answer was.

So yes there was a meeting, but there was no truce. And no resignation letter followed, till much later on December 11.

There has been much speculation on whether Dr Patel offered to resign during his meeting with the PM but was told to hold on till the state elections were over, but nobody with any credibility has backed this theory.

As analysed well by many writers post his resignation, Dr Patel was, after all, his own man contrary to earlier assumptions of him being a yes man.

It's unlikely that he would have settled for a date of resignation as per the convenience of the government. Those who know Dr Patel believe the 24th RBI governor chose his exit date himself.

If that was the case, it's hard to imagine why Dr Patel would keep the PM informed that he was going to step down as governor on a certain date, irrespective of state elections.

What came across as a sudden resignation was perhaps planned for some time but delivered only when he thought the time was right. So it might be futile to look for a fresh trigger.

The reasons for his resignation have been building up and he sent out the missive when the world least expected it. Just a day ahead of the assembly election results and days before a crucial RBI board of directors meeting.

That takes us to the next question: When did the government or rather the PM decide on Das as the one to replace Dr Patel?

Soon after the resignation Monday evening, the PM called a meeting of top bureaucrats and key ministers. The search committee was there to prepare a list, all in a jiffy.

But the consensus candidate was found with no debate or difficulty.

Das, the man who had overseen demonetisation without a fuss, was chosen in record time in that meeting itself.

While everyone kept guessing about an interim candidate, Das was named the 25th governor exactly 24 hours after Dr Patel's exit.

As a former bureaucrat rightly pointed out, nothing is cast in stone when asked about the procedure of selection of an RBI governor.

There's a lot of flexibility in how the shortlist is made and the final selection is done -- that has been the case earlier too though no appointment had been made with this haste.

Finally, when did Das get the call that he was getting the RBI top job?

Monday night, soon after the high level meeting called by the PM, it seems. He got a day to pack his bags for Mumbai.

On Tuesday, it was over to paper work -- Das resigning as member, Finance Commission, and then the announcement that the 25th governor had been appointed.