Congress leader and former Union finance minister P Chidambaram mounted an unprecedented attack on the Centre on Thursday over the economic slowdown and questioned Prime Minister Narendra Modi's "unusual silence" on the issue. 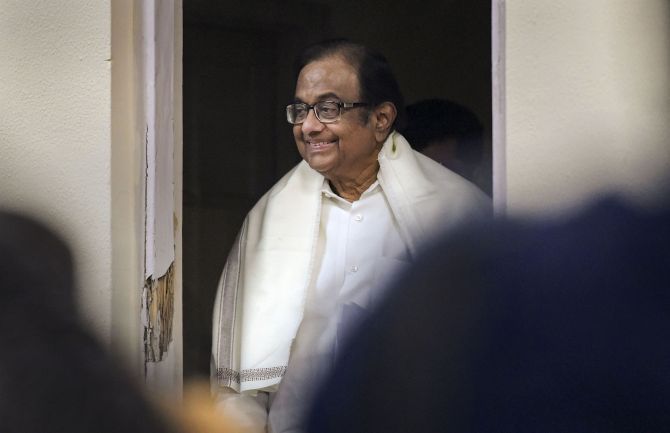 Chidambaram, who was released on bail on Wednesday after spending 106 days in jail, said Modi's silence had left his ministers to indulge in "bluff and bluster".

In the beginning of his press conference, Chidambaram said his first thoughts upon his release were with the Kashmiri people who "have been denied their basic freedoms since August 4, 2019."

"I intend to visit Jammu and Kashmir, if the government allows me to do so," he said.

While the Congress leader refused to speak on his case, he only said that the order would clear the "many layers of dust" that has settled on the understanding of criminal law and the manner in which criminal law had been administered by the courts.

Focusing primarily on the state of economy, Chidambaram said the Bharatiya Janata Party government believed that the problems faced by the economy were cyclical even after seven months into the current financial year.

"The government is wrong. It is wrong because it is clueless," he said.

"It is unable to look for the obvious clues because it is stubborn and mulish in defending its catastrophic mistakes like demonetisation, flawed GST, tax terrorism, regulatory overkill, protectionism, and centralised control of decision-making in the Prime Minister's Office."

According to the Congress leader, the previous UPA dispensation had lifted 14 crore people out of poverty between 2004 and 2014, while the NDA had pushed millions of people below the poverty line since 2016.

"The economy can be brought out of the slowdown, but this government is incapable of doing that," he said. "I believe that the Congress and some other parties are better equipped to pull the economy out of the slowdown and push economic growth, but we have to wait for better times."

Asked about industrialist Rahul Bajaj, who had asked Union Home Minister Amit Shah if people were scared to criticise the government, Chidambaram said: "There is fear everywhere. Media also gripped with fear."