Excessive rain during monsoon and extended showers in the post-monsoon period damaged about 30 per cent of the crop. 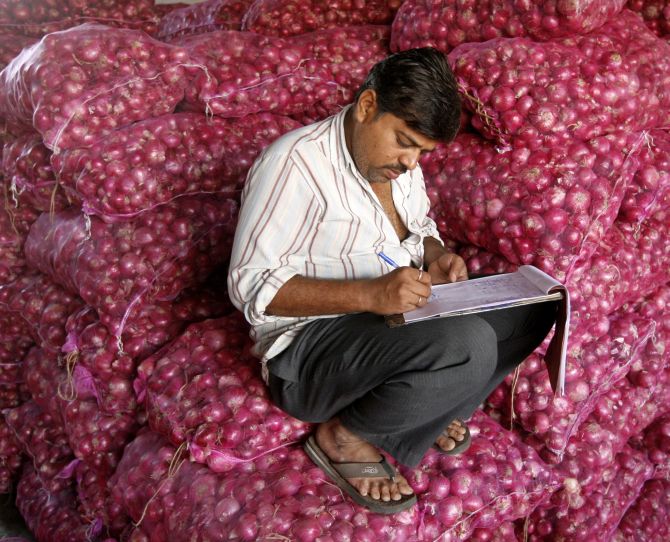 Onion prices are likely to decline by 50 per cent in the next two weeks, as arrivals of seasonal and pre-seasonal varieties of “red onions” from Maharashtra, Gujarat, and Karnataka increase sharply.

Arrival of pre-matured onions has already brought down prices by 42 per cent since Sunday.

They were trading at Rs 41 a kg on Tuesday compared to Rs 71 a kg on Saturday.

Onion arrivals on Tuesday surged to 704 tonnes, compared to 421 tonnes on Sunday.

Arrival of stored onions, however, has declined over the past two days.

Sources said there was hardly any available stock after much of it was spoiled in warehouses because of floods.

"In the next two weeks, we expect it to fall to Rs 30-35 a kg,” said Suvarna Jagtap, chairman, Agriculture Produce Market Committee (APMC), Lasalgaon.

Arrivals of red onion - that cannot be stored for more than three days because of high moisture content - have also increased.

Traders and stockists sell this variety within two days after it is dried in the sun.

“Onion arrivals will increase steadily in the coming days as farmers are harvesting pre-matured crop to cash in on high prices.

"Currently, arrivals are coming in from Nashik, and Dhulia districts. Arrivals from Nandurbar, Jalgaon, Dhule, and other centres are yet to start.

By this time last year, the Lasalgaon mandi had total arrivals of about 2,500 tonnes a day, which is significantly higher than the current daily arrivals.

Excessive rain during monsoon and extended showers in the post-monsoon period damaged about 30 per cent of the crop, said sources.

“This means, arrivals are likely to remain subdued this year.

"Thus, onion prices may not decline to the level they were trading at around this time last year,” said Narendra Wadhwane, secretary, APMC Lasalgaon.

Onion prices in the mandi were as low as Rs 2-3 a kg during this time last year.

Considering 10 per cent spoilage and pilferage, total availability of onion for domestic consumers is about 17-18 million tonnes.

This year, however, 30 per cent kharif crop damage will hit the early onion supply.

However, with the onset of winter, gradual clearance of the cloud cover and diminishing soil moisture, the yield on the onion crop is set to increase from its record low level of 30 per cent.