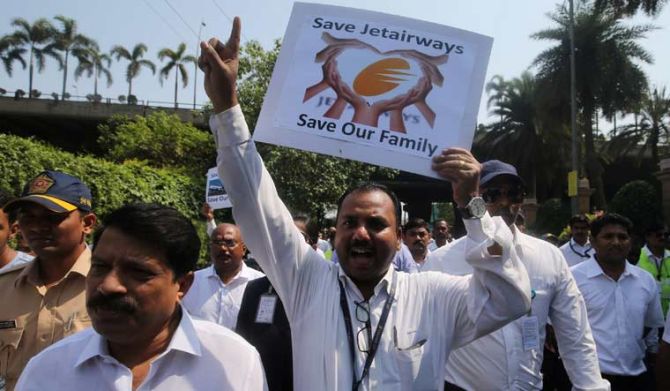 With an uncertain future staring at over 22,000 employees of the grounded Jet Airways, bank unions on Monday suggested offering special loans to them to tide over their financial crisis arising from non-payment of salaries.

Last week bank unions had written to Prime Minister Narendra Modi demanding the government take over the carrier to secure the jobs of its employees.

In a letter to the Indian Banks Association, the union requested the banking lobby to "ask member banks to device a special loan scheme to the Jet staff to help them tide over their present financial problems."

Jet Airways chief executive Vinay Dube had on Saturday said around Rs 170 crore would be needed to clear at least a month's salary.

After flying for 25 years, Jet last week announced grounding after its lenders declined an interim funding of Rs 400 crore.

Jaitley had assured to look into the issues of the grounded airline.

The airline owes over Rs 8,500 crore to banks and around Rs 4,000 crore to its vendors and aircraft lessors and months of salaries to the employees apart from thousands of crores of rupees in ticket refunds to passengers.

That apart it has an accumulated loss of over Rs 13,000 crore.

Bank unions said they were happy that lenders are not showing any hurry to further lend to the airline and have invited bidders to take over.

"When promoter Naresh Goyal is unable to bring in further capital, and when the airline is already cash-starved, it is most prudent that banks do not extend any fresh loans unless some viable proposals come to take over and run the airline," the letter said.