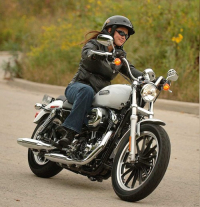 US iconic cult bike maker Harley Davidson seems to be making the right moves to woo Indian women. Within a month of having its first woman buyer in the country, it has added a second one and is eyeing many more.

Hyderabad-based 33-year-old architect Kasthuri Deodhar has become the second woman to own a Harley Davidson in India after Bangalore's HR professional Sheeja Mathews.

"I am sure many more ladies would love to ride a Harley. I really liked when so many people stared at me while I was riding the bike," Deodhar said from Hyderabad on phone.

That's a comment that officials at Harley Davidson India love to hear.

"While we strongly believe Harley Davidson is more of a state of mind and it transcends gender and age, we see a tremendous potential with Indian women riders," Harley Davidson India, Director (Marketing) Sanjay Tripathi said.

He said it is a reflection of a changing India of the 21st century.

"Even in the US, of all the bikes sold in 650 cc and above segment to women, Harley Davidson accounts for the highest number. This trend may also slowly come to India," Tripathi added.

Like Mathews, Deodhar has also been a bike enthusiast from childhood and it was not a surprise when she got the Harley-Davidson Iron 883, which is priced at Rs. 6.5 lakh (ex-showroom) as a gift from her husband.

"We used to have a Yamaha Rajdoot 350 and before that we had (Bajaj) Eliminator and now the Iron, the best that one can ask for," Deodhar said.

While she uses a Hyundai i10 car to commute to her workplace, Deodhar said her latest possession has been reserved for weekend cruises.
© Copyright 2022 PTI. All rights reserved. Republication or redistribution of PTI content, including by framing or similar means, is expressly prohibited without the prior written consent.