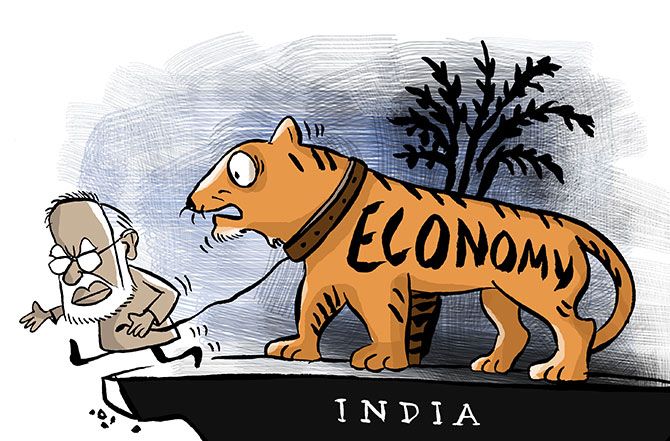 Japanese brokerage Nomura on Friday massively cut its GDP forecast to a low 4.9 per cent for the year from 5.7 per cent earlier, saying the economy is going through a "deeper trough" and even a sub-par recovery is at least a year away.

The negative forecast came on a day when the international rating agency Moody's has revised down the outlook on the sovereign rating to negative from positive citing the many gathering storms around the economy, which is topped by the falling growth rate.

The massive reduction in growth forecast comes amid a slide in GDP growth to a six-year low of 5 per cent for the June quarter and amid high frequency indicators showing a further stress in the growth engine, which may lead the Q2 GDP printing even lower.

"Belying our expectations of a recovery starting in Q3, high-frequency indicators have plunged and credit conditions remain tight amid weak global demand.

“As a result, we now expect a delayed recovery and the subsequent pickup to be sub-par," the Nomura analysts said.

While acknowledging the steps taken by the government and the RBI to prop growth up, it pointed out that a "clogged credit channel of policy transmission and weak global growth" are major headwinds for the economy now.

It had earlier forecast a 5.7 per cent uptick in growth, but it now believes that a pick-up will happen only in FY21 when it sees it is printing in at a 6 per cent.

It also forecast a higher fiscal deficit of 3.7 per cent - 40 bps more than the government target, as no additional revenue stream has been identified to cover up for the massive Rs 1.45 lakh crore corporate tax giveaways.

Calling for a closer monitoring of the credit and financial stability risks, it said, "current tight credit conditions will result in higher bad loans and weaker credit growth, but not in a systemic contagion."

Going a step beyond the oft-cited 'twin balance sheet problem' afflicting the economy, it said there is a third aspect to the same as well with shadow banks facing difficulties and hence making it a "triple balance sheet" problem.

Source: PTI© Copyright 2021 PTI. All rights reserved. Republication or redistribution of PTI content, including by framing or similar means, is expressly prohibited without the prior written consent.
Related News: RBI, Nomura, GDP, FY21, Uttam
SHARE THIS STORY
Print this article