News
Business
Movies
Sports
Cricket
Get Ahead
Money Tips
Shopping
Sign in  |  Create a Rediffmail account
Rediff.com  » Business » No. of Indians visiting US will grow by 42% in 2015 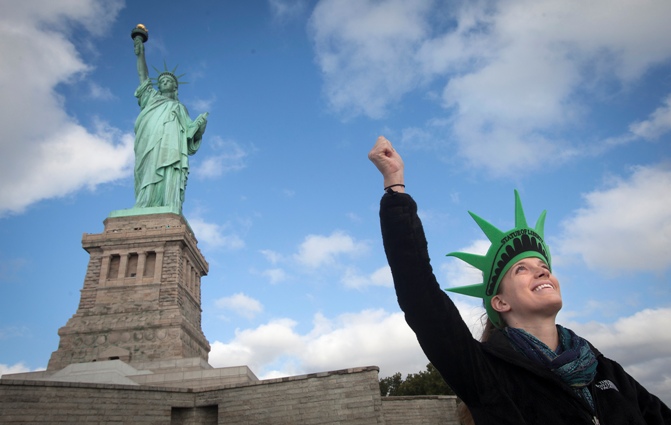 The number of Indian tourists visiting United States this year is expected to grow by 42 per cent, more than four lakh tourists in absolute terms compared to 2014, a report has said.

US department of Commerce in a report on Monday said international visitors who stay one or more nights in the United States will reach a record 77.6 million this year -- up more than 3.6 per cent from total visitors in 2014.

However, China with a whopping 163 per cent projected growth is expected to lead globally and in the Asia Pacific region followed by Colombia (54 per cent) and India (42 per cent), it said.

Commerce Secretary Penny Pritzker speaking at the IPW 2015 luncheon issued the '2015 Spring Travel Forecast' showing America continues to be a premier travel destination and will continue to see strong visitation growth through 2020.

"We want and welcome international visitors to see and experience all America has to offer. As the world economy continues to shift, promoting travel and tourism is essential to our competitiveness, . . . to the success of our businesses and economy," Pritzker said.

"Obama has understood from the beginning how vital travel and tourism is to the economic health of the United States.

“Visitors to our country spent a record $221 billion on travel goods and services last year, supporting 1.1 million total US jobs," she said.

According to the current forecast, the United States will see a 3.8 percent to 4.6 per cent annual growth rate in visitor volume during the 2015-2020 time-frame.

The latest forecast produces a compound annual growth rate during the forecast period of 4.3 per cent -- a slight increase from the 2014 Fall Travel Forecast.

Venezuela is the only country expected to have a decline in volume during the forecast period.

Three countries -- Mexico, China, and Canada -- are expected to account for 61 per cent of the projected growth from 2014 through 2020.

Image: A tourist poses as the Statue of Liberty. Photograph: Reuters

Lalit K Jha in Washington
Source: PTI© Copyright 2022 PTI. All rights reserved. Republication or redistribution of PTI content, including by framing or similar means, is expressly prohibited without the prior written consent.
Related News: United States, US department of Commerce, Penny Pritzker, Statue of Liberty, Mexico
Print this article