The MP for Richmond in Yorkshire, married to Murthy's daughter Akshata, first entered the UK Parliament in 2015 and has fast risen up the Conservative Party ranks as a staunch Brexiteer who had back Johnson's strategy to leave the European Union. 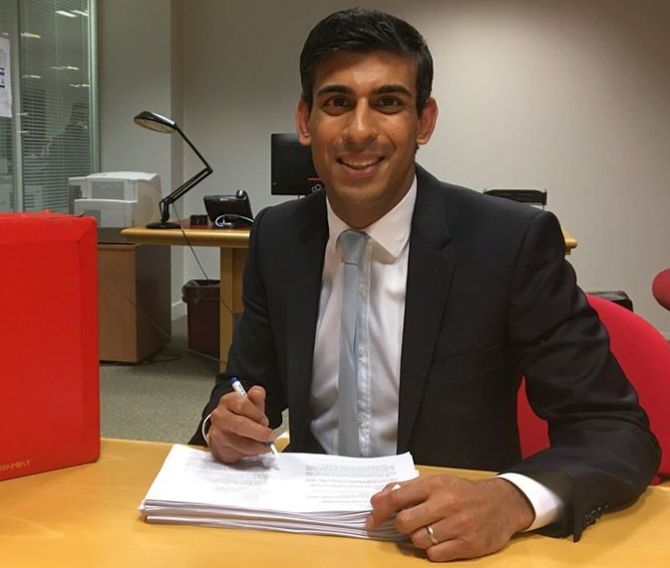 Sunak, the son-in-law of Infosys Co-founder Narayana Murthy, will join home secretary Priti Patel on the top government bench as the Chancellor of the Exchequer.

Earlier, Pakistani-origin Sajid Javid resigned as Chancellor in a shock move in one of the biggest shakeups since Johnson won a thumping majority in the December 2019 general election.

He is replaced by Sunak, who was until now Javid's junior as the Chief Secretary to the Treasury and seen as a rising star within the Cabinet.

The 39-year-old is set to move into No. 11 Downing Street, next door to the Prime Minister's Office as he takes charge of the second most important government position as the finance minister.

"The Queen has been graciously pleased to approve the appointment of Rt Hon Rishi Sunak as Chancellor of the Exchequer," Downing Street said in the official announcement.

The MP for Richmond in Yorkshire, married to Murthy's daughter Akshata, first entered the UK Parliament in 2015 and has fast risen up the Conservative Party ranks as a staunch Brexiteer who had back Johnson's strategy to leave the European Union.

The UK-born son of a pharmacist mother and a National Health Service general practitioner father is an Oxford University and Stanford graduate.

"From working in my mum's tiny chemist shop to my experience building large businesses, I have seen how we should support free enterprise and innovation to ensure Britain has a stronger future," Sunak had said during the Brexit referendum.

He co-founded a 1-billion pound global investment firm and specialised in investing in small British businesses before his entry into politics. He strongly believes that small businesses in the UK would flourish as a result of Brexit as the “vast majority of British businesses (94 per cent) don't have anything to do with the EU; but they are still subject to all EU law”.

Indian-origin MPs Alok Sharma and Suella Braverman are some of the other Indian-origin MPs expected to get a promotion in this week's Cabinet reshuffle, dubbed a purge due to some high-profile resignations and sackings expected.