The Board rued that its efforts to resolve the concerns of the founders - who together own about 12.75 per cent stake in Infosys - over the course of a year through a dialogue have not been successful. 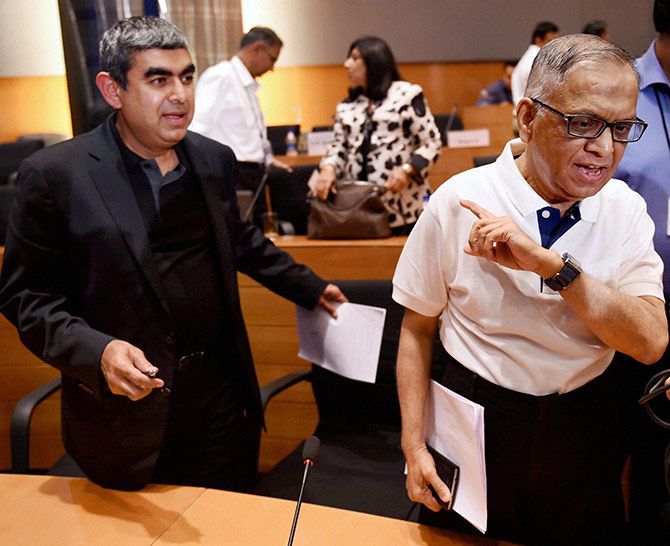 In a scathing attack on N R Narayana Murthy, Infosys Board on Friday blamed his "continuous assault" as the primary reason for CEO Vishal Sikka quitting the company and ruled out a formal role for the co-founder in the company's governance.

There were no immediate comments from Murthy on the allegations.

The Board alleged that a letter authored by Murthy "has been released to various media houses attacking the integrity of the Board and management alleging falling corporate governance standards in the company".

"Murthy's letter contains factual inaccuracies, already-disproved rumours, and statements extracted out of context from his conversations with Board members," it said.

The Board said Murthy has repeatedly made "inappropriate" demands, which are inconsistent with his stated desire for stronger governance.

The Board argued that Murthy's "campaign" has intensified over time.

"Over time the demands have intensified, which when declined by the Board resulted in the threats of media attacks being carried out," it said.

The Board rued that its efforts to resolve the concerns of the founders - who together own about 12.75 per cent stake in Infosys - over the course of a year through a dialogue have not been successful.

The statement added that the Board had tried earnestly to find "feasible solutions within the boundaries of law and without compromising its independence".

It also cautioned that Murthy's actions and demands are damaging the company.

The Board sought to assure shareholders, employees and customers that it "will not be distracted by this misguided campaign" by Murthy and will continue to adhere to the highest international standards of corporate governance.

During an investor call, Sikka said the "continued drumbeat" about former CFO Rajiv Bansal's severance package and Panaya deal in the last 4-5 quarters have been "sickening".

Infosys co-chairman Ravi Venkatesan said the management is highly distressed by the continuing allegations against Sikka and Board members.

Full text of Infosys' letter to the BSE:

It has come to the attention of the Board that a letter authored by Mr. Murthy, the Founder of Infosys has been released to various media houses attacking the integrity of the Board and Management of the Company alleging falling corporate governance standards in the Company. The Board takes great umbrage to the contents of the letter and places on record the following:

FACT: Since Dr. Vishal Sikka was appointed as MD and CEO in August 2014, Infosys has delivered competitive financial performance through profitable revenue growth.

Infosys has, under the leadership of Vishal, developed and articulated a strategy to transform itself to meet the rapidly changing needs of the marketplace in the 21st century.  The Company was lagging significantly behind industry in growth rates when Vishal took over and now we are in top quartile from a performance perspective.

Infosys has grown in revenues, from $2.13B in Q1FY15 to $2.65B this past Q1. This was done while keeping a strong focus on margins, closing this past quarter at 24.1% operating margin, beating some competitors for the first time in many years, and improving against nearly everyone in the industry.

The revenue per employee of the Company has grown for six quarters in a row.  Attrition has fallen, from 23.4% in Q1FY15 to 16.9% this past Q1, and high performer attrition is much lower than the overall Company attrition.

The Company grew its $100M+ clients from 12 in Q1FY15, to 18 this past Q1, and increased its large deal wins from ~$1.9B in FY15 to ~$3.5B this past year.  This has all been done while improving overall utilization (excluding trainees), to a 15-yr high this past quarter, and an all-time high including trainees, while improving our cash reserves, rewarding Infoscions with a new equity plan, and returning Rs. 19,000 Crores as dividend (including dividend distribution tax) over the last three years.  This has all been done while improving standing with clients, to the highest ever in the 12 years with a jump of 22 points in CXO satisfaction.

FACT: Infosys has continued to maintain the highest standards of corporate governance that the Company is known for.

The Board of Infosys is carrying out its shareholder mandate to be an independent board, working towards the best interest of the stakeholders.

The Board has sought the counsel of some of the most respected governance experts and legal advisors in the world, which have thoroughly investigated all anonymous allegations and concluded that no wrongdoing occurred.  For Mr. Murthy to imply – with no evidence whatsoever – that three well-respected international law firms, members of the Infosys Board and certain employees are engaged in some grand global conspiracy to conceal information is not tenable on its face. It is important to mention here that Mr. Murthy was interviewed as part of the investigation by Gibson Dunn & Crutcher LLP in pursuance of the investigation in the Panaya acquisition, and was invited and welcomed to provide any information or evidence he believed would support the allegations being investigated. He did not provide any evidence since none exists. However, he has not mentioned this is his media communication against the investigation.

As previously announced by the Company on June 23, 2017, the Board thoroughly investigated each anonymous allegation with the assistance of highly respected external counsel and experts and determined that the allegations were entirely without merit. The Board will make no additional disclosure of the investigation report because further disclosure would be inconsistent with best corporate audit practices and would compromise the confidence of employees that they could report honestly, openly, and candidly to the company in any future investigation or legal matter.

The Board also believes that any further use of resources and time on these matters would be a distraction for the Company and would enable those wishing unfairly to attack Company personnel to continue this harmful conduct.  Therefore, the Board has formally closed the investigations of the anonymous allegations so that the Company can focus on strategy, performance, and the creation of shareholder value.  The Board remains focused to continuing to support Infosys’s strategy, which it believes is in the best interests of the Company’s shareholders, employees, clients and communities.

FACT: Mr. Murthy’s has made repeatedly made inappropriate demands which are inconsistent with his stated desire for stronger governance.

The Board has, in its fiduciary role to consider all shareholder inputs, treated each demand from Mr. Murthy as a suggestion and only acted on suggestions which we believed was in the best interest of the company and declined to act on others. Over time the demands have intensified, which when declined by the Board resulted in the threats of media attacks being carried out.

FACT: Mr. Murthy may be in the process of engaging in discussions with certain key stakeholders of the Company to further his criticisms of the Board and Management.

We are concerned that this type of campaign runs the risk of confusing investors and undermining the Company’s management efforts.

FACT: The Board is a fully independent Board, with professionals as its members who have been appointed by a clear majority of the shareholders.

Given the commitment of the Board to remain independent and pursue a chosen strategy, the Board currently has no intention of asking Mr. Murthy to play a formal role in the governance of the organization.

Co- Chair of the Board, Ravi Venkatesan has repeatedly over the past few weeks publicly stated his and the Boards support for Dr. Sikka. The Company categorically rejects any speculation or allegation of discord between the Infosys Board and Dr. Sikka. 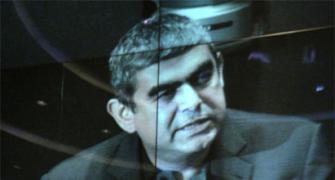 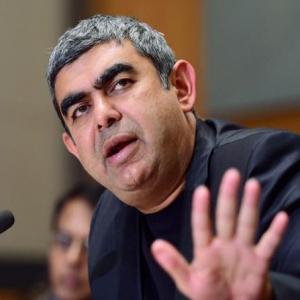 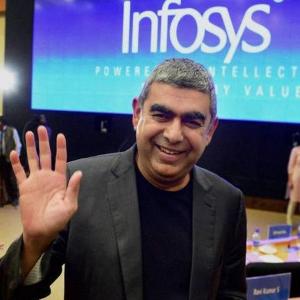