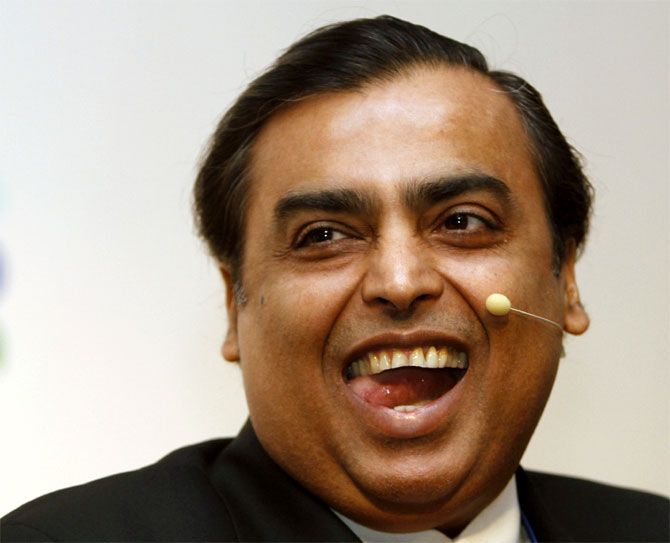 Reliance Industries chief Mukesh Ambani has emerged as India's wealthiest for the 10th straight year as his net worth swelled to USD 38 billion (nearly Rs 2.5 lakh crore), while the wealth of 100 richest rose by 26 per cent despite economic hiccups.

Wipro's Azim Premji was a distant second with a net worth of USD 19 billion, moving up two places from last year, while Sun Pharma's Dilip Shanghvi slipped from his earlier second place to the ninth now (USD 12.1 billion) on Forbes magazine's annual 'India Rich List 2017'.

Patanjali Ayurved's Acharya Balkrishna, known as a close associate of yoga guru Ramdev, made a big jump from 48th place last year to 19th now with a net worth of USD 6.55 billion (about Rs 43,000 crore).

"Despite India's economic hiccups, tycoons on the 2017 Forbes India Rich List saw their wealth soar as their combined fortunes rose 26 per cent to USD 479 billion (over Rs 31 lakh crore)," the magazine said.

"India's turbo-charged economy sputtered in the quarter ended in June as it grew at a three-year low of 5.7 per cent, due to the aftershocks of last November's demonetisation and uncertainties over the rollout of a nation-wide Goods and Services Tax. Despite this, the stock market scaled new heights and boosted the fortunes of the nation's 100 richest," it added.

In the case of Ambani, improved refining margins and his telecom unit Reliance Jio's thundering success in notching up 130 million subscribers since its 2016 launch pushed up the shares of Reliance Industries.

The Hinduja brothers are at the third position with USD 18.4 billion while Lakshmi Mittal is now ranked fourth (USD 16.5 billion) and Pallonji Mistry fifth (USD 16 billion).

Forbes said the list was compiled using shareholding and financial information secured from the families and individuals, stock exchanges, analysts and regulatory agencies.

The ranking lists family fortunes, including those shared among extended families such as the Godrej and Bajaj families. Public fortunes were calculated based on stock prices and exchange rates as of September 15. Private companies were valued-based on similar companies that are publicly traded.

More than four-fifths of those who kept their spot on the list from last year saw their wealth rise, with 27 listees adding USD 1 billion or more to their net worth.

The richest newcomer is cookies-and-airline tycoon Nusli Wadia at the 25th place with a net worth of USD 5.6 billion. Among the five other new entrants to the list are Dinesh Nandwana (88, USD 1.72 billion) of e-governance services firm Vakrangee; Vijay Shekhar Sharma (99, USD 1.47 billion) of fast-rising mobile wallet Paytm and Rana Kapoor (100, USD 1.46 billion) of Yes Bank.

Veteran investor Radhakishan Damani, boosted by the listing of his supermarket chain D-Mart in March, returned to the list at 12th place with a net worth of USD 9.3 billion.

However, a dozen have turned poorer than a year ago, with half of them from the pharmaceutical sector, which has been plagued by challenges.

Pharmaceutical magnate Dilip Shanghvi is the biggest dollar loser on the list as his net worth fell by USD 4.8 billion, ending his three-year run as India's second-richest.

The 100 wealthiest on this year's list are all billionaires. The minimum amount required to make the list was USD 1.46 billion, up from USD 1.25 billion last year.