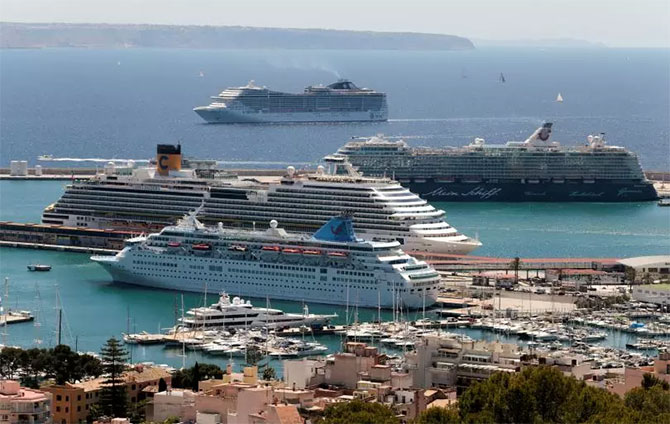 Indians are slowly warming up to cruise tourism, particularly in outbound circuits. Back home, the government is gearing up to boost both river and ocean cruise tourism.

On an average, operators witness a 40 per cent growth rate when it comes to booking cruise holidays abroad.

According to Singapore Tourism Board, the popular cruise destination saw a 29 per cent increase in passengers from India at 100,000 last year.

“At present, share of cruise tourists in India’s overall tourism basket is negligible. But it is growing and the government, too, is keen to boost this sector. This year, we expect a 60 per cent growth rate over the previous year in passenger bookings from India.”

Chadha, a member of the government task force to promote cruise tourism, said Singapore, Dubai, Hong Kong, the Mediterranean and Caribbean are popular destinations among Indians.

“The cost per person is $150-200 per night. This is comparable to what one would typically shell out for an overseas vacation on land,” she said.

Other operators, such as Thomas Cook India and Travkart, too, have experienced growth in demand.

Manheer Singh Sethi, co-founder of Travkart.com, said, “According to data from outbound tourism boards and cruise companies, a growth of 30-35 per cent has been observed in trips comprising leisure, MICE (meetings, incentives, conferencing, exhibitions) and social events. Some brands have slashed their package fees by 10-15 per cent, considering the competition.”

Rajeev Kale, president and country head (leisure travel and MICE) of Thomas Cook (India), said, “Cruise tourism is an attractive brag-worthy proposition and finds a strong appeal as an opportunity to bond with family and rejuvenate without the hassle of packing and unpacking, transfers and catching multiple flights and trains. We are witnessing an impressive year-on-year growth of 22 per cent for our cruise business across segments.”

In 2017, operators said the growth would come from MICE and weddings. “Many religious circuits are also becoming popular. This year, we are expecting more cruise brand sailing from Indian ports -  Mumbai, Cochin and Goa. Dubai Port is going to be a boon for the industry. It will attract a lot of travellers due to easy connectivity. Also, sailing itineraries will be of more interest. We expect growth to touch 40 per cent this year,” Sethi said.

Besides, cruise package providers such as Tirun and Travkart are adding customised Indian menus for travellers.

The Indian government has constituted a task force with secretary (tourism) as its chairman and secretary (shipping) as co-chairman. Based on its recommendation, the ministries of shipping and tourism have appointed a consultant to prepare an action plan and a detailed road map to develop cruise tourism in India.

With a 7,500-km coastline, India has a huge potential that can be tapped, tourism ministry officials had said.

However, of the 12 major ports in India, only Mumbai, Goa, Cochin, New Mangalore and Chennai have facilities for berthing international cruise ships.