Slamming Moody's Analytics for ‘baseless’ criticisms of the government, Minister of State for Finance Jayant Sinha said the arguments forwarded by the agency lacked depth and such comments are made when opponents become "restless" over the government's success.

"Moody's comment was totally baseless and there is no depth in its argument," Sinha said on the sidelines of the Delhi Economics Conclave.

Sinha further said: "As we become successful and do good work for people of the country, our opponents will become restless. When they become restless, such kinds of comments will come."

He said it's endeavour of the government to work for people of the country as it has been mandated to do so. The government had on Wednesday issued a statement dismissing the report of Moody's Analytics published last week, saying it was the personal opinion of a junior analyst which was passed off as a commentary on India by a rating agency "by the media to buttress the narrative it wants to portray".

However, the agency stood by the report, saying it was part of its 'economic outlook series'. Answering queries on Bihar election, Sinha said people of the state have cast vote for development and the BJP.

Most exit polls at the conclusion of voting in the Bihar Assembly elections on Thursday predicted that the Nitish Kumar-led Grand Alliance will win while some forecast victory for the BJP-led group.

"You cannot reach a clear decision based on the exit poll as far as Bihar is concerned. Our election is statistically indeterminate. I am saying this as a scientist and an engineer.

"This time, the margin would be very narrow and how error margin of minimum plus minus 5 per cent would transform into seats could not be reflected by exit polls," the minister said.

Counting of votes will be taken up on Sunday. 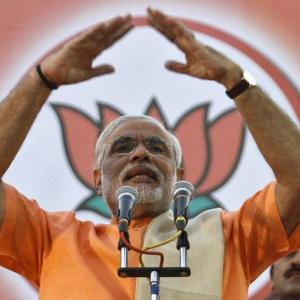