Wooing investors from Germany and the rest of the world, Prime Minister Narendra Modi on Sunday night promised a welcoming business environment in India with a ‘predictable, stable and competitive’ tax regime and asserted that the ‘remaining uncertainties’ will be addressed.

He said the task of turning around the systems in India is ‘huge’ and will not be completed overnight but stressed that the government is firmly moving in that direction and it will be done.

Inaugurating, along with German Chancellor Angela Merkel, the Hannover Fair in which India is a partner country, Modi said his government is ‘removing unnecessary regulations and simplifying our procedures’ to make it easy for doing business in the country and enable foreign companies to participate in the 'Make in India' programme.

"Today, I come to seek German partnership in my own mission to open up India's seamless economic potential.

“To the industry of the world that has assembled here today, I say that we have no special bias for our host today! India is open and ready to embrace the world," he said addressing the gathering of top business leaders from Germany and other parts of the world.

Citing his travels around the world, Modi said he has seen ‘a new level of interest’ in building partnerships of trade, investment and innovation in India.

"It mirrors the surge of hope in our own people and industry; the new tide of expectation in our 800 million youth -- for opportunities and progress. 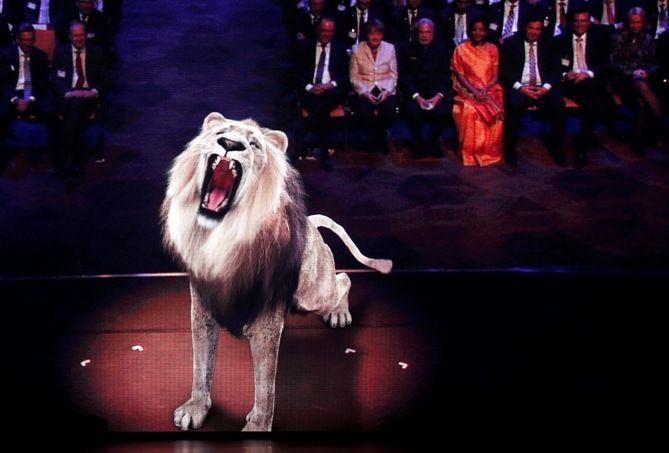 “And, if we want to fulfil the dreams of our youth, we must turn our industry into a manufacturing hub for the world and an engine for employment at home.

“And, we must equip our youth with the skills to meet the needs of our nation and the demands of the globalised world," he said.

Inviting investments and technology, the prime minister said, "We are using digital technology to eliminate multiple approvals and endless wait.

“We will guide you and walk with you in your projects.

“We have set up 'Invest India' and country desks in it that will be networked to the states. “We will nurture innovation and protect your intellectual property."

"There were institutions in India that seemed beyond scrutiny.

“Well, they no longer are.

“We are reforming institutions in ways that has not happened in decades. We are building a tax regime that is predictable, stable and competitive.

“We will now address  the remaining uncertainties.

“The Goods and Services Tax is a long needed revolution that is becoming a reality," Modi said.

"My message to you (foreign investors) is this: You will find environment that is not only open, but also welcoming.

“We will make it easy to do business in India. And, we will always be eager to listen to your feedback," the prime minister said.

Merkel, who led her country out of economic recession, responded by saying that she wanted not only Germany companies to participate in 'Make-in-India' but also 'Make-in-Germany' in which Indian companies could participate.

With regard to Modi's assertion about improving conditions for business in India, she said the two countries will have inter-governmental talks later this year when ‘stock’ can be taken of whether the ‘problems’ have been addressed.

"India and Germany need to change ways of doing business," the Chancellor said.

She said the good volume of trade of 16 billion euros is a ‘good point’ to start.

Observing that France, from where Modi came, was also keen to do business with India, Merkel told the German business leaders, "I know you have competition but more the competition, better you get."

Modi earlier said, "For us, the highest priority is creating world class infrastructure. We have made a sharp increase in public investments.

“We have established a National Infrastructure and Investment Fund and a new institution for integrated development of this sector."

"We are launching attractive new financial instruments for long term funds. We seek to fuel our growth with the cleanest and most efficient use of energy," Modi said.

He said his government has set a target of 75 Giga Watts of new capacity for renewable and clean energy in the next seven years.

"It is a challenging goal -- yes;  but, important to pursue," the Prime Minister said.

Talking about good governance, he said, it is essential ‘not just for our citizens, but also for business.’

Giving an overview of what his government is doing, Modi said, "With transparency and speed, we have resumed long stalled projects and allocation of resources.

“This is adding new momentum to our economy.

“We are instituting a rational framework for acquisition of land without causing distress to farmers and other landowners.

“We are creating a predictable and transparent environment approval process that will protect our natural heritage."

He also highlighted his efforts for cooperative federalism to achieve developmental goals. 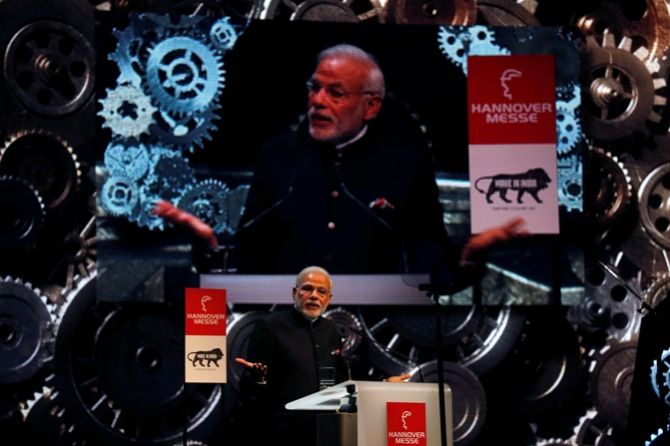 "The investment journey may begin in Delhi, but its success depends on state capitals and districts," he said.

"For the first time, we are working as Team India -- a new partnership between the Centre and the States.

“We are also giving them more resources, so that they can build the infrastructure that you need.

“I also see them as partners in our international engagement," Modi said.

"But, I am also aware that it is easier to change policies and write new laws than it is to change attitudes, culture and systems.

“Every CEO who has tried a turnaround knows that.

“Our task is huge; it won't be completed overnight.

“But, I am confident  that it will.

“And, we are moving firmly and clearly in that direction," he said.

Contending that ‘the wind of change is there and it is gathering speed", he said, "When IMF, the World Bank, credit rating agencies and expert speak in one voice of optimism about India, we know that the wind is blowing in the right direction.

“And, it has made us the fastest growing economy in the world."

Modi said it was not just about financial flows, new technology or products but also about learning from each other, about seeing possibilities in new ways.

"India is a nation that is blessed with so much goodwill in the world.

“Everywhere, I see a strong desire for India to succeed," he said, adding that "the progress of one-sixth of humanity will be of great consequence for the world and our beautiful planet."

"It will be a world of more hope and opportunities; a world more confident of its success," Modi said. 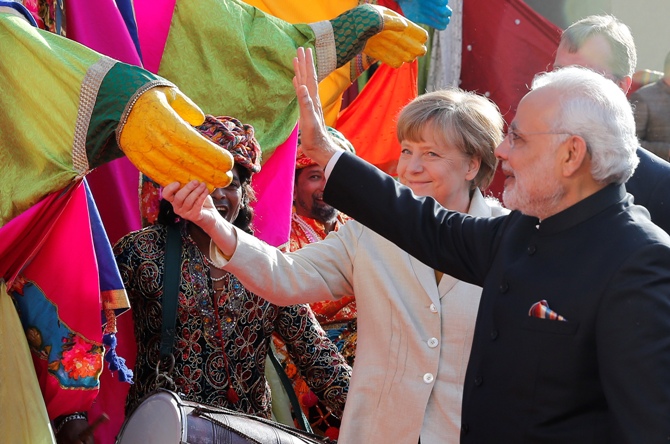 The prime minister underlined that this was a time of political instability and economic challenges and threats of violence that are increasingly close to homes.

"The humanity needs the solidarity and strength of international partnerships more than ever before," he said, adding that "India will do its part -- as an anchor of economic stability; an engine for growth; and, as a force of peace and stability in the world."

"So, let me invite you to do business and make in India -- for India and the world. Let me invite you to be our partner in making a new India. I also welcome you to enjoy our timeless traditions, the ceaseless celebration of diversity; and the warm embrace of friendship."

The inauguration was marked by a cultural programme which showcased cultural diversity of India which is eager to break the walls of poverty.

Twenty Indian CEOs and 350 companies are participating in the Fair. 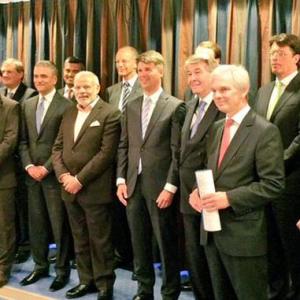