Rediff.com's Syed Firdaus Ashraf arrived at the bank on Thursday morning to withdraw cash, a day after high denomination notes were withdrawn, and encounters a veritable battlefield inside. 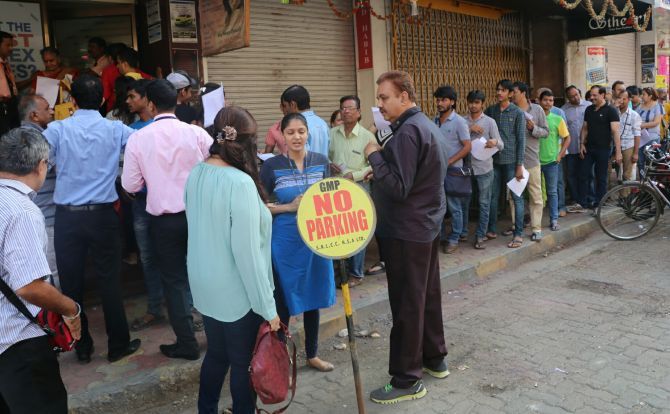 Mission: To withdraw money from the bank and to deposit the decommissioned Rs 500 and Rs 1,000 notes in my bank account.

At 9 am this morning, I set out for the bank near my home.

After the prime minister suddenly decided to outlaw Rs 500 and Rs 1,000 notes, the banks were reopening after a day's break to prepare for the rush.

I expected a queue of cash-seekers like me, but did not anticipate the queue to be so long that I would keep chanting the four words, which it seemed every other person in the queue muttered too: 'Mera number kab aayega?' ('When will my turn come?')

20 minutes later, hot and perspiring, I counted 20 people ahead of me. I wondered if the wait was worth it or if I should postpone my expedition to the bank for another day?

Fortunately, some 10 minutes later, a bank employee came out to say that those who only wanted to withdraw money could go in with him.

I hastily postponed my decision to deposit the Rs 500 and Rs 1,000 notes, and queued up to withdraw some cash as I had no money on me.

After another 10 minute wait I entered the bank. It was like the proverbial fish market inside.

Well-dressed men and women were shouting at the top of their voices.

One man had brought Rs 12 lakhs (Rs 1.2 million) in cash to deposit, but was not being allowed to do so by the bank staff.

His ire was understandable. He had waited a long time to reach the bank counter and deposit the money, and blew a fuse when the teller refused to accept his cash bundle.

The bank's view was understandable. There had been no clear-cut guidelines from the finance ministry on how much cash -- Rs 500 and Rs 1,000 notes, that is -- banks could accept at one go.

It was a tense Mexican standoff, till the inevitable Mumbai-style bhaigiri surfaced.

"Jaante ho main kaun koon! (Do you know who I am!)," the customer shouted.

All eyes in the bank swirled towards him. He didn't look like Salman Khan, no, who could he be?

The bank manager was not having any of this. He emerged from his cabin and told the man sternly: "If you make any more noise, we will call the police."

Other customers jumped in to back the bank manager since the delay the man had caused had delayed them too.

Seeing the public mood had turned against him, Mr Do-You-Know-Who-I-Am! quietly logged out of the bank premises.

His outburst opened a faucet of emotions. One customer shouted that Modi was responsible for all the mayhem. "We expected achche din," he said, "but these are not acche din."

Another man piped up": "These whimsical decisions happened under Mohammed bin Tughlaq, I certainly didn't expect this under Modi."

"Modi will suffer for this in the next elections," an elderly gent standing next to the Mumbai chronicler of medieval history, cursed. "He is making people's lives miserable with his whims and fancies."

"Isn't he seeing all the mess that he has caused in our lives?" the senior citizen asked.

Not known ever for being a cheerleader for Modi, I pitched in, "No, he cannot see all this because he has left for Japan to get us a bullet train."

In such a scenario these days, Modi supporters invariably outnumber the Namo dissers, and the bhakts quickly tried to defuse the tension, stating that the ban on banknotes was good for the economy and cashless transactions was the future for India.

One customer couldn't let this go unchallenged, and quipped: "Does it mean the BJP will henceforth accept and make all payments by cheque?"

Even as everyone had a good laugh, one man, sensing opportunity, tried to jump the queue, leading to fresh chaos.

When my turn came, I was told to show photocopies of documents like my Aadhar and PAN cards.

I meekly did so as instructed, but the teller realised there was no need for it. I was only withdrawing cash, and moreover I had been an account-holder at the bank for 15 years.

I asked if I could exchange at least Rs 4,000 of Rs 500 notes, but my request was quickly declined.

There was a separate queue for those wishing to exchange notes, I was told. This queue was only for cash withdrawals.

"Do I have a choice?" I asked the teller.

Another twist in this tale awaited. The teller said he could only give me Rs 10 and Rs 20 denomination notes.

The teller said the bank's stock of Rs 100 notes was exhausted, and so I would only get the lower denomination notes.

I had no option, but to shrug again in resignation.

Before I left, the teller had some advice for me.

"Be careful while spending, the banker advised. "You cannot withdraw money for one more week as you have reached your weekly withdrawal limit of Rs 10,000."

As I left with a bundle of small notes, I saw more and more people queuing up at the bank.

India, it appeared, had quickly returned to the pre-1991 era when Indians queued up for even basic necessities.

I remember standing in queues as a child to withdraw money from the bank for my parents.

History, as Marx once noted, was repeating itself. This time as tragi-farce.

IMAGE: Crowds outside a bank in Mumbai to withdraw money. Photograph: Hitesh Harisinghani for Rediff.com