Modi has accelerated efforts to make India the next driver in innovation, Sunder Pichai said. 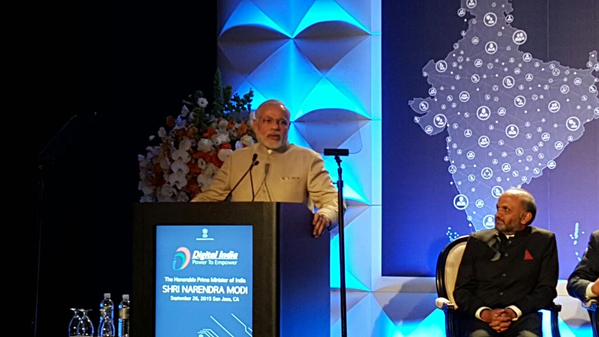 Top CEOs of American companies, which have played a key role in IT revolution the world is experiencing now, have endorsed ambitious 'Digital India' programme, describing it as a vision that would bring India technologically at par with the rest of the world.

"Digital India will bring about solutions for the challenge of digital divide," said Satya Nadella, who took over as Microsoft CEO last year, at a dinner interaction with Prime Minister Narendra Modi.

"Let's empower people from Nanyuki to Srikakulam," Indian-American Nadella said as he detailed out how digital technology can empower people across the world as he talks about Skype for students between schools to exchange ideas.

Speaking at a Digital India dinner in San Jose, he said that next week Microsoft will announce cloud computing from data centers in India. The dinner was attended by who's who of Silicon Valley’s corporate world.

Modi has accelerated efforts to make India the next driver in innovation, said Sunder Pichai, CEO of Google. He said India is the fastest growing startups in the world.

"We are proud of what is happening in India and share Prime Minister’s vision of digital India," he said.

It has the potential to uplift the while of society in India, he said, with top IT CEOs seated on the dais along with Prime Minister Modi at a dinner hosted in his honour.

"I am sure Prime Minister Modi will take Digital India to greater heights," Narayen said, who moderated the discussion.

Along with Nadella, and Narayen, others seated on the dais were John Chambers, CEO of Cisco and next Chairman of US India Business Council (USIBC) and Google CEO Sunder Pichai.

Describing Modi as "amazing ambassador" of India, Chambers endorsed Digital India, saying it has the potential to bring about great changes in India. The US and India would be "very strong together under your leadership", it said.

Chambers said one has to compete against one's ability to innovate, and not against other companies or countries. "If you can change India, you will change the world," he said, adding that internet is the second equalizer in life after education.

Paul Jacobs executive chairman of Qualcomm said, "we are extremely excited and motivated" by the Prime Minister's Digital India initiative.

Observing that mobile technology is changing everybody’s life, he said India is poised to be leader in digital technology.

Sharing Modi's vision of using mobile phone as a key instrument of governance, he said: "India under Prime Minister Modi’s leadership is moving in the right direction."

Ahead of the dinner, Apple CEO Tim Cook; Nadella and Pichai met Prime Minister Modi at his hotel in San Jose. Modi is the first Indian Prime Minister to visit Silicon Valley in more than three decades.

Lalit K Jha in Silicon Valley
© Copyright 2020 PTI. All rights reserved. Republication or redistribution of PTI content, including by framing or similar means, is expressly prohibited without the prior written consent.