As markets extended losses for the sixth successive session, investors became poorer by nearly Rs 10 lakh crore, with Rs 2.7 lakh crore of wealth being wiped out in today's session only amid sell-off in world stocks.

The BSE Sensex cracked below the 34,000-mark by plunging about 1,275 points or 3.6 per cent in opening trade on Tuesday. 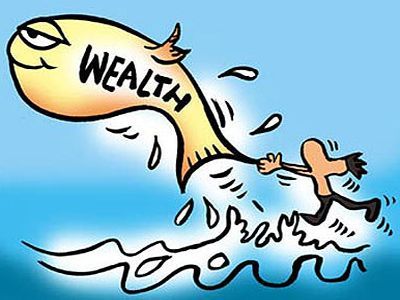 Led by a continuous sell-off, the market capitalisation of BSE-listed companies plummeted by Rs 990,476.93 crore to Rs 1,45,22,830 crore in six trading sessions. “Global sell-off due to spike in global bond yield resulted in a knee-jerk reaction in the domestic market.

“We are seeing an extended impact in the domestic market post the LTCG and fiscal deficit turmoil.

Investor sentiment has also been hit after the government announced in the Budget a proposal to levy 10 per cent long- term capital gains (LTCG) tax on equities and projected a fiscal deficit of 3.5 per cent of GDP for 2017-18.

It was a sea of red as 29 out of 30-Sensex components ended with losses led by Tata Motors.

Tata Steel ended with a marginal gain of 0.06 per cent.

The small-cap and mid-cap stocks dropped by 2.19 per cent and 1.68 per cent, respectively.